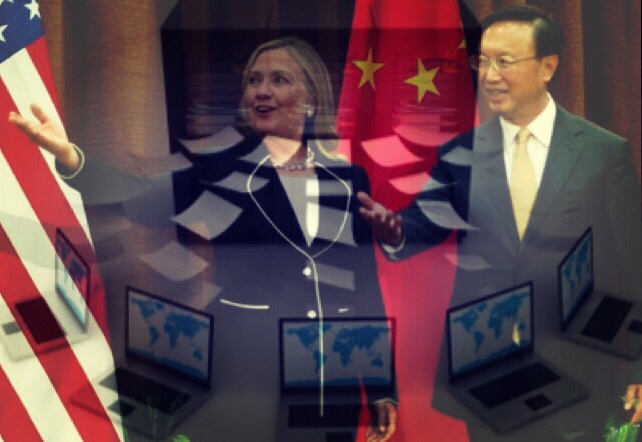 Two sources that were briefed on the situation told The Daily Caller that a Chinese-owned business operating in the D.C. area penetrated Hillary Clinton’s private server and inserted code that forwarded copies of Clinton’s emails to the Chinese company in real time.

According to the sources,

The Chinese wrote code that was embedded in the server, which generated an instant “courtesy copy” for nearly all of her emails and forwarded them to the Chinese company.

At a July 12 House Committee on the Judiciary hearing, Rep. Louie Gohmert (R-TX) said the “Intelligence Community Inspector General (ICIG) found that virtually all of Clinton’s emails were sent to a “foreign entity.” He did not reveal the entity’s identity, but said it was unrelated to Russia.”

The source also said that two ICIG officials, investigator Frank Rucker and attorney Janette McMillan, warned FBI official Peter Strzok and three others “repeatedly” about this, but they failed to act.

An “anomaly” had been discovered in early 2015. The source, a former intelligence official, told The Daily Caller:

“When [the ICIG] did a very deep dive, they found in the actual metadata — the data which is at the header and footer of all the emails — that a copy, a ‘courtesy copy,’ was being sent to a third party and that third party was a known Chinese public company that was involved in collecting intelligence for China,” the former intelligence officer told TheDCNF.

“The [the ICIG] believe that there was some level of phishing. But once they got into the server something was embedded,” he said. “The Chinese are notorious for embedding little surprises like this.”

They would not divulge the name of the Chinese company, but they did say it was a “front group” for the Chinese government.

Hillary’s spokesperson, as expected, refused to even entertain the possibility of foul play.

“IC IG was involved in the review of certain information drawn from the private email server,” an agency spokeswoman told The Daily Caller.

The two IGs asked the Department of Justice to investigate whether the classified information was compromised, according to a July 23, 2015, New York Times report based on unnamed senior government officials.

The FBI issued a referral to the Justice Department in July 2015. The bureau warned that classified information may have been disclosed to a foreign power or to one of its agents.

“FBIHQ, Counterespionage Section, is opening a full investigation based on specific articulated facts provided by an 811 referral from the Inspector General of the Intelligence Community, dated July 6, 2015 regarding the potential compromise of classified information,” a July 10, 2015, FBI memo stated.

“This investigation is also designated a Sensitive Investigative Matter (SIM) due to a connection to a current public official, political appointee or candidate,” the memo stated.

Then-FBI Deputy Director Mark F. Giuliano sent a follow-up memo on July 21, 2015, to President Barack Obama’s deputy attorney general, Sally Yates, about two conversations he had with her about the criminal referral.

“On 13 July 2015 and 20 July 2015, I verbally advised you of a Section 811(c) referral from the Inspector General of the Intelligence Community received by the FBI on 06 July 2015. The referral addressed the mishandling of classified information on the personal e-mail account and electronic media of a former high-level us Government official,” according to the FBI memo, which was hand delivered to Yates.

The treasure trove of incriminating evidence that has accumulated over the last year makes it pretty hard for anyone to deny the deep state’s attempt to overturn Trump’s victory.

Just last week, Real Clear Investigation’s Paul Sperry, released a painstaking and fascinating review of the FBI’s casual treatment of the Clinton emails that turned up on Anthony Weiner’s laptop six weeks before the election. After dragging their feet, they finally performed a cursory review although most of the emails were not even looked at.

And now, if this report is true, it’s clear that Hillary’s “gross negligence” in handling classified information has compromised our national security. How about appointing a special counsel to investigate Hillary Clinton? At the very least, it might keep her from running again.

Elizabeth Vaughn is a conservative political blogger and mom of three residing in southern Connecticut. Following a career in the financial services industry, she is now a regular contributor to Freedom Outpost. Contact her at eliza.vaughn13@gmail.com