A video showing Joe Biden possibly wearing a wire, has gone viral. The video is a zoomed in clip from the first 2020 debate. In the video Biden puts his hand in his jacket and as he removes it, a black line appears. The clip, originally uploaded to Facebook by Jay Ashurst from California, raises one question. Was Joe Biden wired? 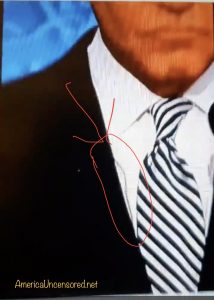 The video quickly made its way from Facebook to Twitter, catching the attention of actor James Woods.

When viewing this clip and taking into account Biden’s refusal to be checked, it’s easy to understand the skepticism. From this view, it does appear that Biden was wearing a wire. If that be the case, the question is why.

With today’s technology, and the availability of wireless ear pieces, not to mention the ability to beam voices into your head. Why in the world was Joe Biden wired?

The answer is, he likely was NOT wearing a wire.

When viewing the CSPAN video below, it appears that Biden’s hand moved a loose part of his shirt, causing the appearance of a black line. At the 1:02:00 mark of CSPAN’s video on YouTube, the mysterious dark object can be seen.

Social media stepped in to only add fuel to the fire. Minuets after being circulated on Twitter, many users were claiming their posts of the video were being removed. Facebook was quick to offer their explanation while flagging the video as false.

For many, this was a sign of a cover up. Considering the history of “fact checks” that are misleading, who could blame them?

After much review of the videos, our take on the issue is that Joe Biden was not wearing a wire. There are many reasons to explain why Biden would need to have someone directing what he says. However, there is no explanation as to why he would be using such dated technology.

As much as we hate siding with the “fact checkers,” the facts do matter.

More importantly, does this issue really even matter? Are we really going so far as to debate whether Joe Biden would be a good president? Not only does he act like a creepy predator, he is also going senile. Not to mention, he has spent nearly 50 years sticking it to the American people.

Are we going to say that a wire proves that Joe is a puppet and pretend that Trump is not?

It should be clear by now that this election will not even matter. Trump has sided with Bill Gates on the most important issue in all of history. Both sides are clear with their intentions to genetically modify you through a biometric vaccine.

No matter who wins, we the people lose.

Author and editor for America Uncensored.net. L Steele has written for online publications since 1999 on a variety of subjects. He has held several positions where he gained knowledge and contacts on subject matter of which he writes. He values honesty and integrity. Views are his alone and do not necessarily reflect the views of anyone else. His articles may be republished in digital form for noncommercial / non-paywall use, provided full author credit and a direct link to the page. You can follow L Steele on LinkedIn, on Twitter, on Minds, and on Facebook. Support for his work at Pay-Pal is appreciated and helps keep his work and this site active.