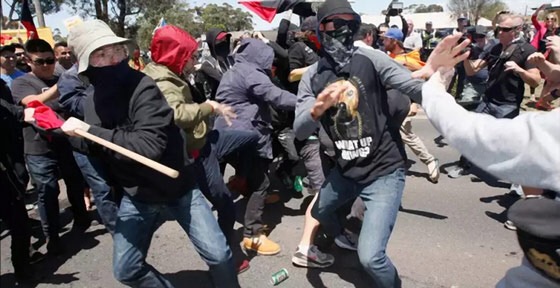 The organization known as Antifa has declared its intentions to cause civil unrest and initiate rioting in many major American cities on November 4, 2017.  Now, Antifa is supposed to stand for “Anti-Fascist,” concurrently denouncing “Capitalism.”  They are comprised of leftists, anarchists, Marxists, and communists.  They embrace a policy of “direct action,” loosely interpreted to refer to protests, vandalism and destruction of property, and physical assaults against individuals and groups.  Their declared objective is specifically to target the far-right (Conservative) and white supremacists (Whites).

They have many groups that are sympathetic, such as University students and professors, the media, and the Marxist Oligarchy of this country who fund their operations indirectly or promulgate their activities with other forms of support.  Antifa is also intelligent enough to not have a central committee or an operating headquarters that could be arrested or targeted respectively.  They follow a very “fluidly dynamic” pattern of utilizing social media and cell phones to coordinate overall activities, while keeping individual tasks compartmentalized with insulation between their teams/units to prevent compromise of the movement.  Such very closely mirrors the activities of the Viet Cong organizational structure minus the hierarchy of a chain-of-command structure.

It is the appearance of being “disorganized” that is the central tenet to their organizational structure: haphazard, akin to a barbarian horde, but with each individual being focused upon the stated objectives.  They accomplish their goals while outwardly appearing to be haphazard or ineffective. The reason: they are forming the “template,” or standard, and their test for its effectiveness will be November 4th.  Their protests and demonstrations have notably been waged against conservative groups and meetings.

Antifa is another tool of the Marxists and Communists in power in the U.S., both politically (the Senate and House of Representatives, infested with communists and globalists) and economically (Oligarchs, CEO’s and large corporate segments of banking, business, and industry) with one objective:

To destroy the United States from within, and enable an invasion from without.

The politicos and oligarchs have found an army of fools (mostly among the “disenchanted” youth and students) and “front-line” leaders to carry out subversive attacks and civil unrest that can lead to anarchy and a real civil war with no discernable/identifiable battle lines.  It has happened before: with the Weather Underground, a collection of communist-leaning punks and protestors…the student riffraff that eventually became enriched and tenured professors…to influence a whole new generation of fledgling “progressive” communists.  For proof of this look no further than William Ayers and Bernardine Dohrn: both “respected academicians and professors” who are looked at with halos of awe and reverence.

Eventually most of them (especially the ringleaders, such as Ayers and Dohrn) were acquitted, placed on probation, or fined.  Many of them slipped through a crack provided by Jimmy Carter when he was in office that provided amnesty for draft-dodgers.  Most used this vehicle to escape any charges they would have faced as members of the Weather Underground.

Know your enemy!  This Antifa is an enemy of the American people and the Constitution of the United States.  Here are some links:

1Ammo Land has an excellent piece overall that gives the “cast of characters” in Antifa, and spells out their objectives with photos and visual “treats,” at this link.

As you can read within the articles, Antifa is smart, and they are aided and augmented by other groups.  Soros himself funds them: through the Tides Foundation that runs to the Alliance for Global Justice, and then filters down to Antifa. The events so far have not been nationwide, but November 4 may just change that.  There was an article entitled Antifa Planning Nationwide Riots on November 4, 2017, by Off Grid Survival that categorizes and reports some of their stated (upcoming) activities.  Here are two excerpts taken from two of the Antifa websites:

“According to two ANTIFA-based websites, these lunatics think that inflicting terror throughout the country will put an end to the “Trump/Pence regime”.

ANTIFA are planning a nationwide day of riots on November 4th, which they say will force President Trump out of office.

This Nightmare Must End: The Trump/Pence Regime Must Go!

Who should attend this conference? Students and youth, the faith community, representatives of organizations and people who are unaffiliated, artists and professionals, long-time activists and folks who have never protested before – everyone who wants to see the nightmare of the Trump/Pence Regime end and is willing to act together to accomplish this. We will start organizing now for: NOVEMBER 4, 2017

Take To The Streets And Public Squares in cities and towns across the country continuing day after day and night after night—not stopping—until our DEMAND is met.

We will gather in the streets and public squares of cities and towns across this country, at first many thousands declaring that this whole regime is illegitimate and that we will not stop until our single demand is met: This Nightmare Must End: the Trump/Pence Regime Must Go!

Our protest must grow day after day and night after night—thousands becoming hundreds of thousands, and then millions—determined to act to put a stop to the grave danger that the Trump/Pence Regime poses to the world by demanding that this whole regime be removed from power.”

Will these guys mount an effective insurrection, or will it be “lip service” (in the manner of “Anonymous”) or fizzle out akin to the protests prior to the presidential elections?  The larger danger will surface if the country becomes embroiled in a struggle with civil rioting and uprisings and leave our attentions diverted from the possibility of a foreign attack.  What better time than in a moment of weakness fostered by confusion?  At any rate, we’ll know the answer to the question next weekend.  Let’s be prepared for the possibility that it can all go downhill.

Jeremiah Johnson is the Nom de plume of a retired Green Beret of the United States Army Special Forces (Airborne).  Mr. Johnson is also a Gunsmith, a Certified Master Herbalist, a Montana Master Food Preserver, and a graduate of the U.S. Army’s SERE school (Survival Evasion Resistance Escape).  He lives in a cabin in the mountains of Western Montana with his wife and three cats. You can follow Jeremiah’s regular writings at SHTFplan.com or contact him here.