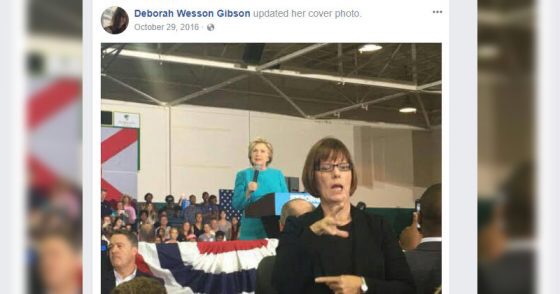 In a shocking development in the series of allegations against Alabama Republican Senate candidate Judge Roy Moore, it has now been revealed that one of the accusers has worked for Hillary Clinton and is a public supporter of Moore’s opponent, Democrat Doug Jones.

The allegations, published in a highly promoted piece by the openly Democrat aligned Washington Post, claim that Moore had a series of inappropriate relationships with several teenagers some 34 years ago. Although The Post repeatedly stated that the allegations do not include actual sexual contact, they are none the less shocking.

Now, after 24 hours of the mainstream media promoting the allegations as fact as well as establishment Republicans immediately demanding that Moore resign, we are starting to learn more about who the actual accusers are as well as their connections to not only Moore’s opponent, but the Democratic Party in general.

It turns out that one of the accusers, Debbie Gibson, is actually a “fervent” Democrat who has literally worked with the DNC as a sign language interpreter for both Hillary Clinton and Joe Biden. Gibson has also publicly supported Doug Jones, Moore’s opponent in the Alabama senate race

Keep in mind that The Washington Post seemingly purposefully left this KEY FACT out of their “reporting” which one has to assume the “journalists” on the story knew about as it took less than 24 hours for independent researchers to find. Post reporters Stephanie McCrummen, Beth Reinhard and Alice Crites ALL apparently thought it was unimportant for their readers to be aware of this obvious conflict of interest. All three have also repeatedly discussed their hatred for both Trump and Moore throughout social media.

This alone should call into question the entire narrative around Moore, especially when you consider that The Post had already announced their support for his opponent.

For her part, Moore’s wife Kayla Moore, told The Activist Mommy yesterday that, “The Washington Post has been calling and harassing our friends and family, trying to find garbage. We’ve had people back home telling us they are getting phone calls and when they would tell them good things, the Washington Post would ask them if they knew anything bad on him.”

Amazingly, her statement lines up with a rumor going around Twitter that claims that a reporter for the Post named Beth (presumably Beth Reinhard) had offered a women in Alabama $1000 to accuse Roy Moore.

As Activist Mommy reported, “Go figure! This is exactly what Kayla claims has been happening.”

In a report about Gibson for Infowars.com, Kit Daniels noted the lawyer speak the Washington Post used in order to pretend that none of the accusers had anything to do with the Democratic Party.

Interestingly, when attacking Moore ally Steve Bannon for suggesting the Washington Post was politically motivated in its reporting, the newspaper implied that Gibson wasn’t “down with Democratic propaganda,” a statement which seemingly conflicts with Gibson’s political activism.

“According to campaign reports, none of the women has donated to or worked for Moore’s Democratic opponent, Doug Jones, or his rivals in the Republican primary…”

But notice the precise wording; it’s lawyer-speak. It might very well be true that Gibson didn’t donate or work for Doug Jones, but according to her Facebook profile, she did actively campaign for him, which doesn’t help her credibility and it should have been reported – yet the Washington Post conveniently left it out.

Make no mistake, this was purposeful deception.

While the allegations against Moore are obviously disgusting in their own right, one has to wonder if this entire thing was nothing more than a Washington Post fueled Democratic Party hit piece aimed at taking out a candidate that both the establishment and the paper itself are openly against.

What do you think?