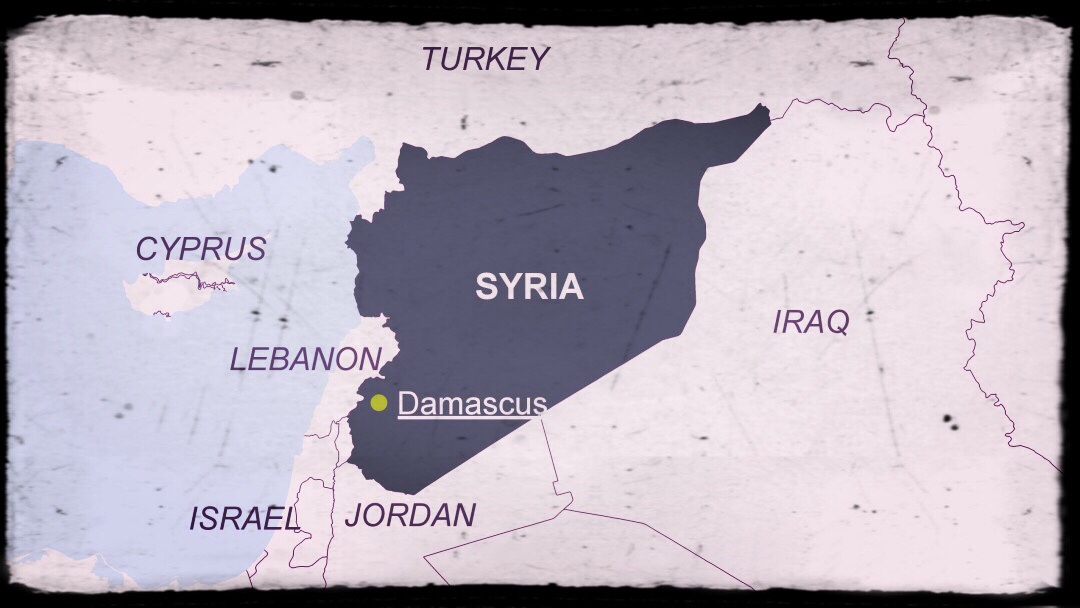 The US, Britain and France trampled international law to launch missiles against Syria, claiming to have “evidence” of the government’s use of chemical weapons. That evidence is based on terrorist lies.

After a week of outrageous tweets and proclamations by POTUS Trump, which included continued accusations that Syria’s president ordered a chemical weapons attack on civilians in Douma, east of Damascus, with Trump using grotesque and juvenile terminology, such as “animal Assad,” the very evening before chemical weapons inspectors of the OPCW were to visit Douma, America and allies launched illegal bombings against Syria. The illegal bombings included 103 missiles, 71 of which Russia states were intercepted.

For the past week, we were told that the US had ‘evidence’ and the UK had ‘evidence’ that Syria had used chemicals. The ‘evidence’ largely relied on video clips and photos shared on social media, provided by the Western-funded White Helmets (that “rescuer” group that somehow only operates in Al-Qaeda and co-terrorist occupied areas and participates in torture and executions), as well as by Yaser al-Doumani, a man whose allegiance to Jaysh al-Islam is clear from his own Facebook posts, for example of former Jaysh al-Islam leader, Zahran Alloush.

This, we were told, was ‘evidence.’ This and the words of the highly partial, USAID-funded, US State Department allied Syrian American Medical Society, which, like Al-Qaeda’s rescuers, only supports doctors in terrorist-occupied areas.

On April 12, even US Secretary of Defense James Mattis told the House Armed Services Committee that the US government does not have any evidence that sarin or chlorine was used, that he was still looking for evidence.

Syria, finding the claims to be lies and the sources tainted, requested that the Organisation for the Prohibition of Chemical Weapons (OPCW) immediately come to Syria to investigate the claims. Accordingly, the OPCW agreed to send a team—the visas for which Syria granted immediately—which arrived in Damascus on April 14.

President Trump, instead of waiting for an investigation to confirm his ‘evidence,’ chose the very night before this investigative team would arrive in Syria to inspect the allegations, to bomb Syria. The timing of the attacks is more than just a little timely. And the bombings were illegal.

General Mattis tried to dance around the legality, stating, “the president has the authority under Article II of the Constitution to use military force overseas to defend important United States national interests.”

But he is wrong, this does not permit the US to illegally bomb a sovereign nation, and he knows it. So does Russia. In a statement on April 14, Russian President Vladimir Putin declared the attacks as illegal, noting:

“Without the sanction of the Security Council of the United Nations, in violation of the UN Charter, norms and principles of international law, an act of aggression against a sovereign state that is at the forefront of the fight against terrorism has been committed.”

What if chemicals had been at targeted locations?

In the same Pentagon briefing, General Joseph Dunford specified the US and allies’ targets in Syria, alleging they were “specifically associated with the Syrian regime’s chemical weapons program.” One target, at which 76 missiles were fired, was the Barzeh scientific research centre in heavily-populated Damascus itself, which Dunford claimed was involved in the “development, production and testing of chemical and biological warfare technology.”

This ‘target’ is in the middle of a densely-inhabited area of Damascus. According to Damascus resident Dr. (of business and economy) Mudar Barakat, who knows the area in question, “the establishment consists of a number of buildings. One of them is a teaching institute. They are very close to the homes of the people around.”

Of the strikes, Dunford claimed they “inflicted maximum damage, without unnecessary risk to innocent civilians.”

If one believed the claims to be accurate, would bombing them really save Syrian lives, or to the contrary cause mass deaths? Where is the logic in bombing facilities believed to contain hazardous, toxic chemicals in or near densely populated areas?

Regarding the actual nature of the buildings bombed, Syrian media, SANA, describes the Pharmaceutical and Chemical Industries Research Institute as “centered on preparing the chemical compositions for cancer drugs.” The destruction of this institute is particularly bitter, as, under the criminal western sanctions, cancer medicines sales to Syria are prohibited.

Interviews with one of its employees, Said Said, corroborate SANA’s description of the facility making cancer treatment and other medicinal components. One article includes Said’s logical point: “If there were chemical weapons, we would not be able to stand here. I’ve been here since 5:30 am in full health – I’m not coughing.”

Of the facility, the same SANA article noted that its labs had been visited by the OPCW, which issued two reports negating claims of any chemical weapons activities. This is a point Syria’s Ambassador al-Ja’afari raised in the April 14 UN Security Council meeting, noting that the OPCW “handed to Syria an official document which confirmed that the Barzeh centre was not used for any type of chemical activity” that would be in contravention to Syria’s obligations regarding the OPCW.

Bombings based on Al-Qaeda and Jaysh al-Islam Claims

The entire pretext of the US and allies’ illegal bombings of Syria is immoral and flawed. There is no evidence to the claims that Syria used chemicals in Douma. Numerous analysts have pointed out the obvious: that Syria would not benefit from having used chemical weapons. But America, Israel and allies would benefit from staged attacks.

The website Moon of Alabama noted discrepancies in the videos passed around on social media as “evidence” of Syria’s culpability, including the following:

“The ‘treatment’ by the ‘rebels’, dousing with water and administering some asthma spray, is unprofessional and many of the ‘patients’ seem to have no real problem. It is theater. The real medical personnel are seen in the background working on a real patient.”

Russia’s Defense Ministry has released interviews with two men who were included in the footage alleging a chemical attack has occurred. One of the men, Halil Ajij, said he worked in the hospital in question, they had treated people for smoke poisoning, saying: “We treated them, based on their suffocation,” also noting: “We didn’t see any patient with symptoms of a chemical weapons poisoning,” he said.

In an April 14 interview on Sky News, the former British Ambassador to Syria, Peter Ford, argued that the most elementary stage in the accusations game is to allow the actual inspection to occur.

“The evidence that chemical weapons were dropped is non-existent. Let the inspectors go in and possibly within days we will have a verdict but the jury is still out. …I’m totally confident that the inspectors will not produce one shred of evidence to back up the assertions of the Americans. If the Americans had proof, they’d have brought it forward. What they’re saying and what Mrs. May is saying, is just ‘take our word for it, trust us’. There’s not even a dodgy dossier this time.”

While the world’s eyes have been glazed over by chemical weapons script-reading journalists of corporate media, little notice is given to the ongoing Israeli slaughter and maiming of Palestinian unarmed demonstrators, targeted assassinations that last re-began with the March 30 murders of at least 17 unarmed Palestinians protesting in Gaza’s eastern regions. Israel’s murder of these unarmed youths, women and men got only mild tut-tuts from the UN, and was relegated to “clashes” by slavish corporate media. Israel is literally getting away with murder, as eyes are turned elsewhere.

According to Secretary Mattis, the US-led illegal attack on Syria “demonstrates international resolve to prevent chemical weapons from being used on anyone under any circumstances in contravention of international law.”

The irony? Both America and its close ally Israel have used chemical weapons on civilians. The US has attacked civilians in Vietnam and Iraq, to name but two countries, with chemical weapons.

In 2009, I was living in Gaza and documenting Israel’s war crimes when Israel bombed civilians all over Gaza with white phosphorous. These were civilians with nowhere to run or hide, including civilians who had fled their homes and taken shelter in a UN-recognized school. I myself documented numerous instances of Israel’s use of white phosphorous.

If this doesn’t outrage American citizens, the billions of US taxpayers’ dollars sent to Israel and spent on the bombing of sovereign nations — and not on America’s impoverished, nor on affordable health care — should outrage.

However, as author Jonathan Cook noted, the issue is not merely Trump’s threats to Syria:

“There is bipartisan support for this madness. Hillary Clinton and the Democratic leadership in the US, and much of the parliamentary Labour party in the UK, are fully on board with these actions. In fact, they have been goading Trump into launching attacks.”

By not attacking Russian forces in Syria this time, the US narrowly avoided a direct military confrontation with Russia, one which would have had global ramifications, to say the least.

The question now is: will the regime-change alliance be stupid and cruel enough to support yet another false flag chemical attack in their unending efforts to depose the Syrian president, or will they give up the game and allow Syria’s full return to peace? The US and allies claim their concern for Syrian civilians, but do everything in their power to ensure civilians suffer from terrorism and sanctions.

Eva Bartlett is a freelance journalist and rights activist with extensive experience in the Gaza Strip and Syria. Her writings can be found on her blog, In Gaza.