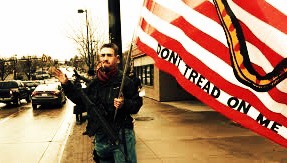 The US District Court for the District of Colorado has deferred ruling on the constitutionality of unconstitutional regulations imposed by Boulder Colorado’s City Council.  In doing so, they have opened the door to tyrannical gun bans.

Back in May, a court decision set things in motion.

The city talked about banning certain weapons, not only a really stupid idea, but an unlawful one.  They also discussed how they might limit what weapons law-abiding citizens would be permitted to purchase, and what kinds of ammunition they could obtain.

Among the weapons that were banned were some of the most commonly used guns in the US.

According to Mountain States Legal Foundation:

In a decision issued yesterday, the U.S. District Court for the District of Colorado refrained from vindicating the constitutionally protected rights of Boulder residents.

In May of this year, the City of Boulder enacted an array of unconstitutional firearm and magazine regulations. Yesterday, the court deferred to the State of Colorado court system to determine whether the city had the authority to enact its new regulations in the first place.

“While we will always support the principle of federalism, this decision forces the people of Boulder to wait to vindicate their rights under the U.S. Constitution,” said Cody J. Wisniewski, of Mountain States Legal Foundation, the lead attorney on the case.

Boulder city council members voted unanimously to ban some of the most commonly used firearms and magazines in the United States. Council members also raised the age of legal gun ownership in the city from 18 to 21.

Boulder resident Jon Caldara, a plaintiff in the lawsuit who seeks to have Boulder’s ordinance overturned, is a vocal opponent of the City of Boulder’s discrimination against firearm owners.

“I have lived in Boulder since 1984,” Mr. Caldara said. “I believe we need to hold Boulder to its own standards in celebrating diversity and tolerance.”

“This is hate,” Mr. Caldara added, speaking of the city council’s view toward gun owners. “These are elitists who want people like me out of their town.”

Mr. Wisniewski added that the plaintiffs are evaluating their options in the wake of yesterday’s decision. “We will not give up the fight to defend the constitutionally protected rights of the people of Boulder,” he said.

In 2012, Mountain States Legal Foundation, on behalf of its clients, prevailed in the Colorado Supreme Court in Regents of the University of Colorado v. Students for Concealed Carry on Campus. The Court’s unanimous decision in that case confirmed the right of concealed carry permit holders to possess concealed firearms on the public university’s campus.

Mountain States Legal Foundation, created in 1977, is a nonprofit, public-interest legal foundation dedicated to individual liberty, the right to own and use property, limited and ethical government, and the free enterprise system.  Its offices are in suburban Denver, Colorado.

The right to keep and bear arms is a God-given right that is to be protected by those in government, not infringed on.  Perhaps if the people in Boulder simply carried their weapons with them down to city hall and demanded the Council trash the ban, that might have an impact.  If not, there’s always tossing unlawful and criminal representatives out of office.  I’m glad to see that some people are not taking the tyranny sitting down.