Of course, all sources of wireless exposure can make people sick – Bluetooth, cell phone radiation and WiFi – not just 5G.  All telecom companies have been warning investors about liability for many years – not just Ericsson.

Ericsson warns “we cannot guarantee that we will not become the subject of product liability claims or be held liable for such claims or be required to comply with future changed regulatory requirements that may have an adverse effect on our business, operating results, financial condition, reputation and brand.”

Ericsson  is a Swedish multinational networking and telecommunications company headquartered in Stockholm. 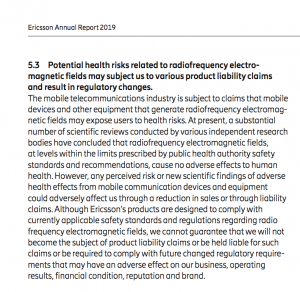 Fortunately, Ericsson has stopped 5G installation though for the weekend due to protests.

Ericsson said its U.S. and Canadian field staff will not be doing any on-site work over the weekend except in the case of emergencies after reports surfaced that 5G protests are planned.

“NATE as an organization has heard through official channels that there are 5G Global Protest Day activities being planned throughout the country this Saturday, June 6, 2020,” the advisory states. “NATE reminds our member companies and their employees to remain safe, exercise vigilance and report any unusual or suspicious activities that they witness when traveling to and working at tower sites this weekend.”

NATE’s bulletin came after the U.S. Department of Homeland Security issued a warning several weeks ago to telecom companies, wireless contractors and the technician workforce that cell tower/wireless infrastructure sites could be potentially subject to attacks based on some incidents at tower sites around the world, including Canada. Earlier this year, numerous cell towers in the Memphis, Tennessee, area were set on fire.

It’s against this backdrop that NATE has been closely monitoring social media activities and issued the warning, according to NATE President and CEO Todd Schlekeway. NATE also has heard directly from many of its members, including wireless carriers, tower owners and large general contractors, about exercising caution and additional planning due to the Global 5G Protest Day scheduled for Saturday.