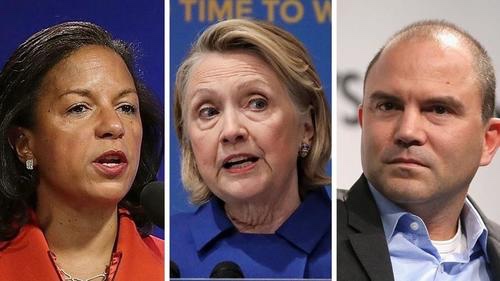 In what Judicial Watch describes as a “major victory for accountability,” a federal judge ruled Tuesday that former national security adviser Susan Rice and former deputy national security adviser Ben Rhodes must answer written questions about the State Department’s response to the deadly 2012 terror attack in Benghazi, Libya, as part of an ongoing legal battle over whether Hillary Clinton sought to deliberately evade public record laws by using a private email server while secretary of state.

As Fox News’ Samuel Chamberlain reports, the judge’s order amounts to approval of a discovery plan he ordered last month. In that ruling, Lamberth wrote that Clinton’s use of a private email account was “one of the gravest modern offenses to government transparency” and said the response of the State and Justice Departments “smacks of outrageous misconduct.”

▪ Whether Clinton intentionally attempted to evade the Freedom of Information Act (FOIA) by using a non-government email system;

▪ whether the State Department’s efforts to settle this case beginning in late 2014 amounted to bad faith; and

Discovery is scheduled to be completed within 120 days. The court will hold a post-discovery hearing to determine if Judicial Watch may also depose additional witnesses, including Clinton and her former Chief of Staff Cheryl Mills.

Yet Rice’s talking points and State’s understanding of the attack play an unavoidably central role in this case: information about the points’ development and content, as well as their discussion and dissemination before and after Rice’s appearances could reveal unsearched, relevant records; State’s role in the points’ content and development could shed light on Clinton’s motives for shielding her emails from FOIA requesters or on State’s reluctance to search her emails.

Judicial Watch also may serve interrogatories on Monica Hanley, a former staff member in the State Department’s Office of the Secretary, and on Lauren Jiloty, Clinton’s former special assistant.

According to Lamberth’s order, regarding whether Clinton’s private email use while Secretary of State was an intentional attempt to evade FOIA, Judicial Watch may depose:

Eric Boswell, the former Assistant Secretary for Diplomatic Security.… Boswell’s March 2009 memo to Mills … discusses security risks Clinton’s Blackberry use posed more generally. And Boswell personally discussed the memo with Clinton. So, he plainly has relevant information about that conversation and about his general knowledge of Clinton’s email use. Judicial Watch may depose Boswell.

Justin Cooper. the Clinton Foundation employee who created the clintonemail.com server. In its proposal, Judicial Watch noted Cooper’s prior congressional testimony “appears to contradict portions of the testimony provided by Huma Abedin in the case before Judge Sullivan.” … Cooper repeatedly told Congress that Abedin helped set-up the Clintons’ private server, e.g., Examining Preservation of State Department Federal Records: [before a Congressional hearing] Abedin testified under oath she did not know about the server until six years later.… Judicial Watch may depose Cooper.

Clarence Finney, the former deputy director of State’s Executive Secretariat staff…. [T]his case’s questions hinge on what specific State employees knew and when they knew it. As the principal advisor and records management expert responsible for controlling Clinton’s official correspondence and records, Finney’s knowledge is particularly relevant. And especially given the concerns about government misconduct that prompted this discovery, Judicial Watch’s ability to take his direct testimony and ask follow-up questions is critical.

Additionally, Judicial Watch states that it seeks to go beyond cursory, second-hand testimony and directly ask Finney what he knew about Clinton’s email use. This includes asking about emails suggesting he knew about her private email use in 2014, and emails he received concerning a December 2012 FOIA request from Citizens for Responsible Ethics in Washington (CREW) regarding senior officials’ personal email use-topics State’s 30(b)(6) deposition in Judge Sullivan’s case never addressed. Judicial Watch may depose Finney.

4. Heather Samuelson. the former State Department senior advisor who helped facilitate State’s receipt of Hillary Clinton’s emails.… [T]his case turns on what specific government employees knew and when they knew it. Judicial Watch must be able to take their direct testimony and ask them follow-up questions. Judicial Watch may depose Samuelson.

Regarding whether the State Department’s settlement attempts that began in late 2014 amounted to “bad faith,” Judicial Watch was granted depositions from the State Department under Rule 30(b)(6); Finney; John Hackett, the former deputy director of State’s Office of Information Programs & Services; Gene Smilansky, an attorney-advisor within State’s Office of the Legal Advisor; Samuelson; and others.

Judicial Watch was also granted interrogatories on whether the State Department adequately searched for responsive records, as well as several document requests.

“In a major victory for accountability, Judge Lamberth today authorized Judicial Watch to take discovery on whether the Clinton email system evaded FOIA and whether the Benghazi scandal was one reason for keeping Mrs. Clinton’s email secret,” said Judicial Watch President Tom Fitton.

“Today, Judicial Watch issued document requests and other discovery to the State Department about the Clinton email scandal. Next up, we will begin questioning key witnesses under oath.”

▪ Copies of any updates and/or talking points given to Ambassador Rice by the White House or any federal agency concerning, regarding, or related to the September 11, 2012 attack on the U.S. consulate in Benghazi, Libya.

▪ Any and all records or communications concerning, regarding, or relating to talking points or updates on the Benghazi attack given to Ambassador Rice by the White House or any federal agency.

The Judicial Watch discovery plan was in response to a December 6, 2018, ruling by Judge Lamberth.

Incredibly, Justice Department attorneys admit in a filing opposing Judicial Watch’s limited discovery that “Counsel for State contacted the counsel of some third parties that Plaintiff originally included in its draft discovery proposal to obtain their client’s position on being deposed.” This collusion occurred despite criticism from the Court that the DOJ engaged in “chicanery” to cover up misconduct and that career employees in the State and Justice Departments may have “colluded to scuttle public scrutiny of Clinton, skirt FOIA, and hoodwink this Court.”

Judicial Watch countered that “[t]he government’s proposal, which is really nothing more than an opposition to [Judicial Watch’s] plan, demonstrates that it continues to reject any impropriety on its part and that it seeks to block any meaningful inquiry into its ‘outrageous misconduct.’”

As a reminder, this Judicial Watch FOIA lawsuit led directly to the disclosure of the Clinton email system in 2015.

Copyright Information: This content has been contributed to America Uncensored by a third-party or has been republished with permission from the author. You are encouraged to click their link above for more interesting content.