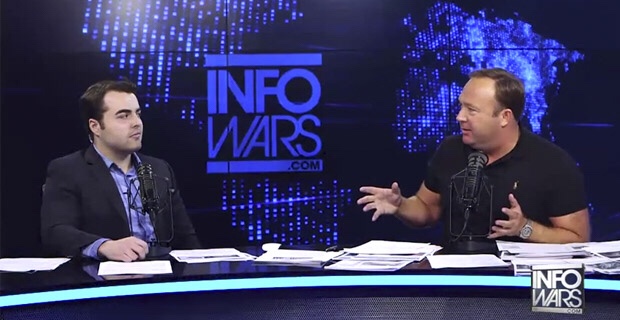 Fox News has now begun to engage in propaganda against Infowars host Alex Jones, claiming that he was operating a pirate radio station that was shut down by the FCC and misrepresenting what he actually said on several occasions.

Whether you like Alex Jones or not is pretty irrelevant to what is being done to the man via social media and now by the media.  Some of you may be surprised that Fox News engages in this propaganda, but it’s been going on for years on their network.  Don’t think just because they have some people you share views with that the network is either really conservative or constitutional.

Jones breaks down exactly what took place in this short piece, courtesy of Real.Video.

The Fox News clip is then played at the end of it and sure enough, Jones is right.  Not only did they lie about it being Jones’ radio station, which FCC chairman Agit Pai even said the station was merely broadcasting Alex Jones, but they lied about things he said, editing clips completely out of context.

Furthermore, they continually use the term “conspiracy theorist” to Alex Jones to try and discredit him by using that in a similar manner to how Communists use the term “racist.”  It’s ironic as Fox News pieces together their own conspiracies, and rightly so, about Obama, Clinton, Lynch and Holder, as well as others, and now Comey, Mueller and McCabe in new scandals, but somehow, those aren’t conspiracies.

A conspiracy simply implies that at least two people work together to achieve an end.  Clearly, this took place in something as recent as the New Mexico jihadi camp where someone authorized its destruction and someone carried it out.  That’s a conspiracy!

Theories begin to develop due to lack of transparency and information, whether right or wrong, but one thing is for sure, the media is scared of Alex Jones and it isn’t just the mainstream.

Fox News is not the only so-called “conservative” outlet that has gone after Alex Jones.  Several months ago, I posted vital information regarding a memo about NSA abuses.

At that time, these were posted at FreeRepublic.com.  One would think they would be welcomed, but FreeRepublic.com, which I supported financially, removed all of them, and even kicked me off the site because I simply referenced Alex Jones’ Infowars as the source.

Here’s what I got from the moderators there.

So, if you referenced Infowars with credible information, FreeRepublic is “having none of it.”  So much for “free,” and I know they cry about freedom of speech there.  In fact, they have allowed entire posts of mine to be posted in full without permission.  When I asked why they would pull something that exposed the crimes of the federal government, I got this.

And when I challenged that as Nazi-style censorship, I got this. 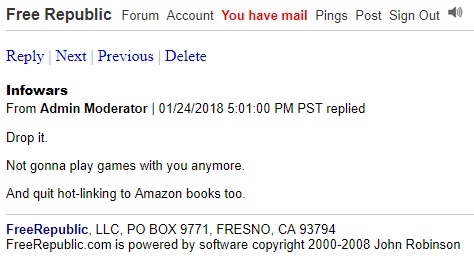 In any case, the point is that you cannot trust so-called conservative news and other sites to actually uphold free speech.  Yes, sites like FreeRepublic.com are privately owned, but they take in roughly $90,000 every quarter from donors, of which I was one of them.

Sadly, the owner had a problem with me making mention of one of his posters posting my column in full without permission while the poster was blasting me for carrying articles from others that I have written permission to carry on the sites I edit.  Here’s what he had to say.

The point I’m making is that both of these outlets have it in for Alex Jones and Infowars.  To his credit, whether you like him or not, Jones has broke major stories that neither Fox News nor FreeRepublic would dare even look in the direction without using the dreaded “conspiracy theory.”

Friends, when someone cries “conspiracy theorist,” just set your mind to think of the Communists who cried “racist.”  The attempt is the same:  They want to shut you down.  Don’t let them.