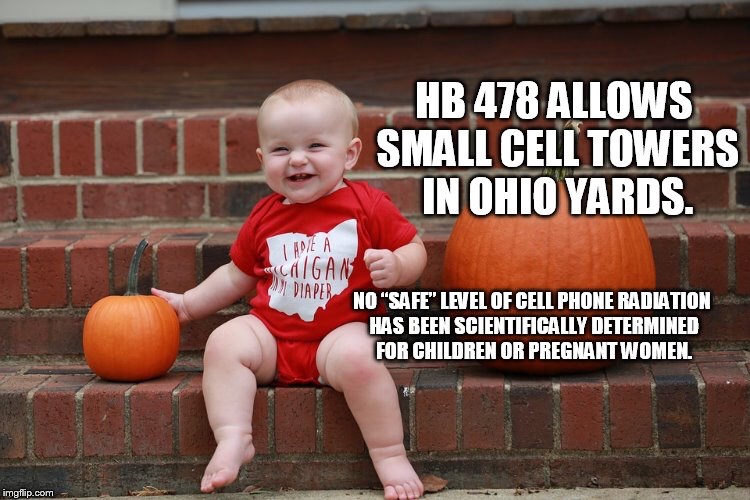 In December 2016, Governor John Kasich signed Senate Bill 331 (aka “The Petland Bill”) which had originally been written regarding puppy mills and the humane treatment of animals.  At the last minute, several completely unrelated clauses were added to it.  One of them eliminated municipal governments’ ability to stop telecom companies from installing small cell tower infrastructure wherever they wanted – including in front of homes, in public rights of ways, historical districts, etc.  This violated the Ohio Constitution’s “single subject rule” and many immediately cried foul.

Because of all of this, Ohio elected officials decided to create a brand spanking new bill – one that proudly gives telecom companies the right to do whatever they please:  HB 478:  Small Cells Expansion Bill.

It’s still being opposed.  But it’s also being voted on this week.

Outside of Ohio, consumer groups, doctors, environmentalists, municipal governments, and scientists have been fighting similar state bills.  Because of this, they have not passed.

Firefighters have fought cell towers being installed on station property for many years already due to health concerns.

There are also 50+ federal bills being discussed which will eliminate municipal authority regarding cell tower placement.  These are also being fought.

The Nation recently published an article about cell phone safety and 5G technology.  The Wireless Industry is being compared to “Big Tobacco” and “Big Oil.”  Those of us who have lived long enough understand that this isn’t a compliment.

The article has been recirculated by other publications such as Democracy Now.Last week, NPR also featured the article and topic for discussion during their On Point program.

So what does Dr. Oz have to do with this?  Controversy regarding cell phone and wireless radiation is nothing new.  In 2009, he spoke about it on Good Morning America.

On February 9, 2018, he featured a segment on his show called “The Rise of 5G Cell Towers.”  According to his introduction, these cell towers are being installed everywhere so Americans can “binge-watch, surf and post online” at faster speeds without their screens freezing up or being disconnected.

5G is new technology.  But there is still firm research there is more potential harm from it than 4G wireless.

The human body has between two million to four million sweat ducts. Dr. Ben-Ishai of Hebrew University, Israel explains that our sweat ducts act like “an array of helical antennas when exposed to these wavelengths,” meaning that we become more conductive.

Sweat ducts acting like helical antennas = MORE SWEATING.  Of course, 5G may also increase your metabolism.  But it still means being a sweatier than usual 24/7.   That’s not sexy.

Of course, 5G cell towers are going to affect children and pets, too.

But let’s get back to the binge-watching.  Encouraging and enabling Ohioans to “binge-watch, surf and post online” seems particularly inappropriate considering there is already a rampant opioid addiction problem in the state.  Attorney General, Mike Dewine already filed lawsuits with several pharmaceutical companies and claimed “Drugmakers got Ohioans addicted, raked in profits.”

5G small cell towers are also a key component in connecting everything together a la “The Internet of Things (IoT).”  IoT already has a 75% failure rate due to hacking and more.  This is a threat to your privacy.  Therefore, IoT is really only cool if you like being hacked and having your privacy violated.

Security experts like Huffington Post’s Bruce Kushnick can’t say enough BAD things about IoT or 5G.  He’s referred to it as taxpayers being forced to bailout the telecom industry.

If none of this still bothers you, small cell towers being installed in front of homes and in neighborhoods will also reduce property value.

Over the past few months, many media sources including CBS News have been encouraging us to be more careful with our cell phones and other personal wireless devices and electronics.  Many have also encouraged parents to limit how much their children use these devices.  Tech inventors already have been doing this for several years. Maybe it’s because they knew that no “safe” level of cell phone or wireless (WiFi) radiation has still been scientifically determined for children or pregnant women.

Ohio elected officials don’t seem to care about that.  Or maybe it’s just that their brains have been too scrambled by all of this already.

What’s worse – since 2010, most Ohio utility companies have also installed digital or wireless “Smart” utility meters on homes and buildings throughout the state.  Ohio Senate Bill 181 “Smart Meter Consent Bill” was introduced in 2013 and endorsed by the ACLU.

It didn’t pass but many Ohio utilities eventually started offering “opt-outs” because of all the complaints.

All over the world, these meters have caused enormous problems already.  Many have already been replaced because of fires, explosions, malfunctioning appliances, measurement errors, general failure, and depreciation.   Many Ohioans now seem to be footing the bill to replace their old crappy “smart” meters with new crappy “smart” meters.

You may not have suffered any consequences yet from these “smart” meters.  But if you end up with a small cell tower near your home you’re basically being double-fried by microwave radiation.  Ay, oh, way to go, Ohio.

Have you ever asked yourself, “If Wireless Radiation Exposure Is No Big Deal, Why Do Manuals for Cell Phones, iPads, Wi-Fi Routers, Etc. Include Guidelines and Warnings?”

Maybe you should ask that of your elected officials if they have.

Ohioans, if you don’t want this installed all over your state, start calling your senators today and tell them to VOTE NO on HB 478:

Contributed by B.N. Frank of ActivistPost.com where this article was originally published.