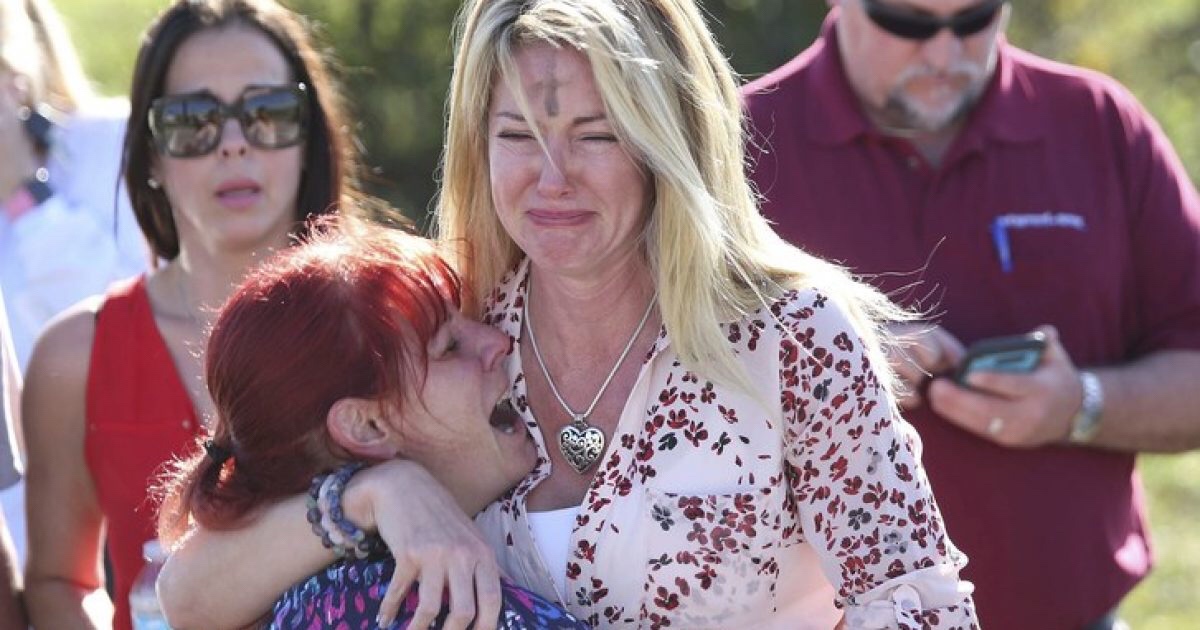 News that the school’s security video was on a 20-minute delay is distressing. The latest development that an armed guard, “The Coward of Broward County”, stood outside while the shooting was in progress is contemptible.

Mass shootings have become so frequent over the last few years; they have almost lost their power to shock us.

Unfortunately, there is no one law or combination of laws that will prevent another school shooting from happening again. The aftermath of every massacre is filled with rhetoric from politicians, parents and the press demanding action. Then the dust settles and we forget about it…until the next one.

The behavior of most school shooters raises numerous red flags prior to the actual attack. Nikolas Cruz was no exception. And yes, I am quite aware that we see so much more clearly in hindsight. But this young man sent out so many signals prior to the shooting that, if acted upon, may very well have prevented the attack.

The frequency of school shootings can be reduced through a dual strategy. The first part involves setting up a support network to include students, teachers, local law enforcement, government agencies who have interacted with the individual concerned and the FBI. Essentially, it should become a formal version of “if you see something, say something.” But this network must have an established, organized structure through which information would flow in a direct, predetermined manner (leaving a paper trail) to ultimately reach the FBI. People need to be held accountable. The FBI must set up a formal department to deal with these threats.  School shootings are now happening with regularity and they must be treated as the serious domestic threat they have become.

The FBI were notified twice about Nikolas Cruz, but failed to act. There is no excuse for this.

Nikolas Cruz was a very troubled young man. Police had been called to his home on many occasions.

“For years before Nikolas Cruz gunned down classmates and teachers at his former high school, his mother had repeatedly called police to the home to help deal with his violent outbursts, threats and self-destructive behavior, according to police documents obtained by CNN on Friday.

The incident reports, which are as recent as September 2016, describe Cruz as suffering from mental illness and being “emotionally handicapped,” and being on behavioral medication. One notes, “He has mentioned in the past that he would like to purchase a firearm.”

The documents include more than 30 reports going back as far as 2011, covering misbehavior by Cruz and some by his younger brother. They add further depth to the emerging portrait of Cruz as an unstable teen who had long been on the radar of law enforcement, behavioral specialists, teachers and fellow students.”

“Those emergency calls ranged from ‘mentally ill person’ to ‘child/elderly abuse’ to ‘domestic disturbance’ to ‘missing person.’ According to the court documents, details of those calls weren’t available and almost all of them are marked ‘no written report.’”

How is it possible that Cruz was able to pass a background check? Because of Cruz’s misbehavior, his mother had called the local police to their home over 30 times between 2011 and September 2016. However, Cruz was not arrested.

Four days after his 18th birthday, “sheriff’s deputies and adult welfare investigators” from the Department of Children and Family Services visited the Cruz home in response to a report that Cruz had “cut his arms on Snapchat and said he wanted to buy a gun.” Excerpts from the agency’s final report follow.

“Mr. Cruz has fresh cuts on both his arms. Mr. Cruz stated he plans to go out and buy a gun. It is unknown what he is buying the gun for.”

Investigators concluded there were “some implications” for Cruz’s safety but determined he was receiving adequate support from his school and outpatient care from Henderson Mental Health in Broward County.

“[Cruz’s] final level of risk is low as [he] resides with his mother, attends school and receives counseling through Henderson.”

His current “attorneys said the Snapchat incident alerted at least four local agencies — Children and Family Services, the Broward Sheriff’s Office, the Broward school district and Henderson Behavioral Health, one of the largest mental health providers in the county — that Cruz was in crisis and posed a potential danger to himself and others.

“Every single red flag was being thrown up by this kid, four days after his 18th birthday, and nothing was done to help him,” said Chief Assistant Public Defender Gordon Weekes.

The owners of the gun store followed the law in their sale of an AR-15 semi-automatic rifle to Nikolas Cruz in February 2017.  They ran a background check, as they were required to do, which he passed. That is astounding.

The system checks for felony convictions, instances of domestic violence, addiction to illegal drugs and involuntary commitments due to mental illness.

But it does not check for school expulsions, other mental health history or domestic disturbances that do not result in criminal charges.

The system also does not review a person’s public statements or explicit threats to commit violence, such as Cruz’s multiple comments online — in his own name — in which he boldly declared his intentions.

One of Cruz’s peers notified local law enforcement about his statements on social media. When she felt she hadn’t been taken seriously, she contacted the FBI on January 5, 2018.

“You know, it’s just so much,” she said on the call. “I know he’s—he’s going to explode.” She said she was making the call because she wanted a “clear conscience if he takes off and, and just starts shooting places up.”…

The caller began by saying Mr. Cruz had the mental capacity of a 12- or 14-year-old. She said he had started posting messages on his Instagram account that he wanted to kill himself and she’d alerted police to that threat, but wasn’t sure what happened in that investigation.

More recently, Mr. Cruz “switched it to he wants to kill people,” the unidentified woman told the operator in a somewhat rambling conversation.

“Something is gonna happen,” she said. “Because he’s, he doesn’t have the mental capacity. He can’t, he’s so outraged if someone talks to him about certain things.”

The caller described disturbing behavior by Mr. Cruz, including a propensity for cutting up frogs and, at least on one occasion, a bird.

The FBI took no action.

The FBI was also warned about Cruz by a YouTube video blogger in September 2017. Cruz had left a comment on his blog saying, “I’m going to be a professional school shooter.” Once again, the FBI failed to act.

Math teacher Jim Gard said that school authorities had emailed teachers about Mr. Cruz’s behavior. “We were told last year that he wasn’t allowed on campus with a backpack on him…There were problems with him last year threatening students, and I guess he was asked to leave campus.”

In Cruz’s case, the red flags could not be misconstrued.

Students, teachers, Children and Family Services, the Broward Sheriff’s Office, the Broward School District, Henderson Behavioral Health, and two phone calls to the FBI…how was this not prevented?

The second part of the strategy involves the hardening of targets, which would significantly decrease the frequency of school shootings, and if one should happen, these measures might stop the carnage sooner, saving lives.

Trump says the single most important step to be taken is the hardening of targets.

In today’s world, schools are gun-free zones. If a mentally ill student pulls out a firearm in a classroom or a crowded cafeteria, he can continue shooting until the police arrive which would take several minutes at least or until he runs out of ammunition or is somehow subdued. In the meantime, the carnage can be catastrophic.

If, on the other hand, there were several armed adults present, a combination of armed policemen and faculty members with concealed carry permits, who could act quickly in the event of an emergency to protect students, the killing would be stopped much sooner, resulting in less loss of life.

I am not proposing that we train all teachers, against their will, to carry and operate a gun. But, in any random faculty, there are likely a number of people who are very comfortable around firearms and who may even own a gun for reasons ranging from self-defense to hunting. These are the individuals who should be issued concealed carry permits.

Moreover, the knowledge that there were armed adults on the premises, especially if a potential shooter was unaware of whom those adults were, might act as a deterrent to a potential shooter. This would go a long way toward reducing the frequency of these attacks or would shorten the attack if one were to occur.

Critics will point to Thursday’s new development that there was an armed deputy at the school on the day of the shooting. School Resource Officer Scot Peterson, who was armed, stood outside the school for four minutes as Nikolas Cruz continued his six-minute killing spree. He is now being called “The Coward of Broward County.”

Sheriff Israel told reporters that Peterson was in an office inside the school when the shooting began. Video then shows him taking up a defensive position outside, but never entering the building.

Scot Peterson failed to act, possibly out of fear. However, the school’s security video was on a 20-minute delay, which helped no one considering Cruz’s entire shooting spree took six minutes. Peterson had no idea where in the building the shooter was. This is not an excuse. It was his duty to enter the building and locate the killer. But a “real-time” video would have been of significant help to law enforcement on that day.

And a high school student in Wisconsin has invented a device that makes it difficult to open a locked door.

“Unlike other products, JustinKase does not allow a door to open even a crack which means students & staff can remain safe while emergency personnel race to the scene,” said creator Justin Rivard, “a student at Somerset High School in Wisconsin. You can lock a door with a lock, and it can get shot out. You can lock a door with this, and it can’t get shot out. You can’t get around it.”

Asking Americans to abandon their Second Amendment right to bear arms is not an answer. Guns are here to stay. A nationwide confiscation of firearms would not only be unconstitutional, it would be unfeasible. There are far too many guns in circulation today for the government to possibly round them all up. If this were tried, “bad guys” would surely not turn in their guns, and the law-abiding citizens who did would be left defenseless and vulnerable.

All Americans, including politicians from both parties, parents and the press, need to realize that we are working toward the same goal, which is to reduce the number of school shootings. This can be accomplished without an attack our Constitution.

Elizabeth was born and raised in southern Connecticut where she currently resides with her husband and two golden retrievers. She worked as a financial consultant at Merrill Lynch in New York City prior to becoming a stay-at-home mom of three. She has since earned her MBA and become an options trader.