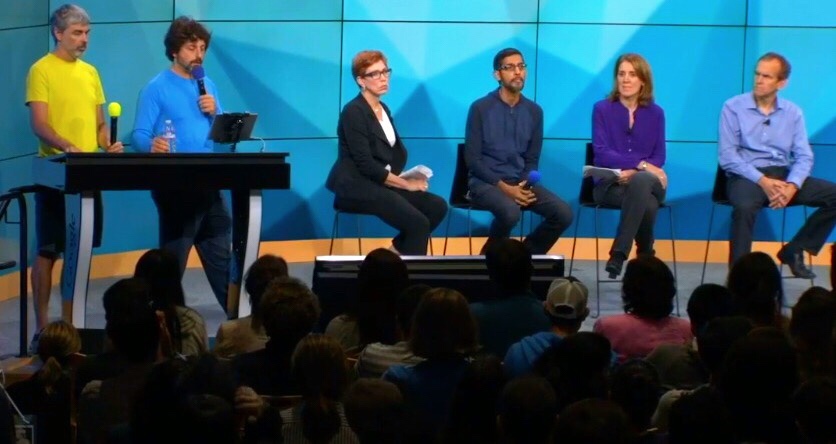 It’s time to arrest and prosecute Google executives for racketeering and fraud.

“These individuals, who preside over a company with unrivaled influence over the flow of information, can be seen disparaging the motivations of Trump voters and plotting ways to use their vast resources to thwart the Trump agenda,” reports Breitbart News:

Co-founder Sergey Brin can be heard comparing Trump supporters to fascists and extremists. Brin argues that like other extremists, Trump voters were motivated by “boredom,” which he says in the past led to fascism and communism. The Google co-founder then asks his company to consider what it can do to ensure a “better quality of governance and decision-making.”

In the bombshell video recording, Google co-founder Sergey Brin says the election of Trump “conflicts with many of [Google’s] values” and vows to use the power and influence of Google to make sure such outcomes never occur again. See the full video which has been mirrored at Real.video:

Google CFO Ruth Porat then promises that Google will “use the great strength and resources and reach we have to continue to advance really important values,” meaning they will commit election fraud to ensure that Democrats win all future elections.

Google has been carrying out its criminal racketeering and election fraud operations by:

Don’t forget that Google’s Chairman Eric Schmidt also offered to “fund, advise and recruit” for Hillary Clinton, using the power of Google to meddle in the 2016 election. This was all made public in a series of damning leaked emails published by The Gateway Pundit and others.

Nearly every website that has worked to expose Google’s election meddling, racketeering and fraud has been banned or heavily penalized by Google itself.

Google is a threat to democracy; its executives are dangerous, deranged cultists

What’s clear from all this is that Google is a serious threat to democracy. With Google determining what voices are allowed to be heard on the internet, the very bedrock of democratic societies — open debate and discussion — has been utterly destroyed.

Even more alarmingly, Google has plunged itself into a cult of left-wing lunacy, where its own executives espouse truly deranged ideas as “fact” such as the ludicrous idea that biological men can magically transform into women, or that “men have periods.” Nearly every Google executive believes these insanely idiotic “libtard” ideas. In fact, they claim that anyone who doesn’t agree with the fairy tale of transgenderism is engaged in “hate speech” and must be banned or silenced.

Just like the other tech giants, Google declares anything it does like to be either “fake news” or “Russian propaganda.” Pro-Trump, pro-America or pro-liberty content is outright blacklisted by Google through the company’s dishonest mind games that define “facts” as anything uttered by a progressive.

Because of Google’s dominance, the internet is now ruled by insane libtard cultists who belong in an insane asylum, not in the boardrooms of tech giants.

I saw this coming over a year ago, when I first posted the following podcast which has been banned by YouTube and Google. It’s called “To save America, we must defeat Google,” and it lays out why Google is a threat to every civil society on the planet.

Hear this podcast at the following link on REAL.video, the YouTube alternative I launched to provide a platform for those who are being censored by YouTube and Google:

Contributed by Mike Adams of NaturalNews.com