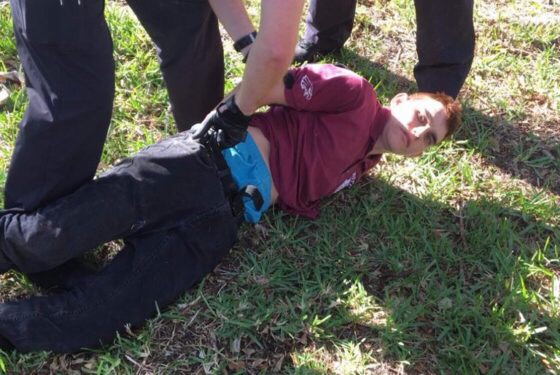 Marjory Stoneman Douglas High School teacher Stacey Lippel is speaking out about what – or more specifically, who – she saw shooting up the school on that fateful Valentine’s Day. Lippel says the shooter was in “full metal garb” which is in stark contrast to the image (above) of the alleged shooter that the mainstream media continues to show us.

Lippel, who is a creative writing teacher, says she was only about 2o feet away from the shooter as a “barrage” of bullets flew down the hallway and into classrooms. Lippel’s arm was grazed by one of the bullets fired by the gunman who she says was in “full metal garb” and was even wearing a helmet.

“I suddenly saw the shooter about 20 feet from me standing at the end of the hallway actively shooting down the hallway. Just a barrage of bullets.  And I’m staring at him thinking ‘why is the police here?’ This is strange because he’s in full metal garb. Helmet, face-mask, bulletproof armor, shooting this rifle that I’ve never seen before.” –Stacy Lippel

Watch the video before YouTube removes it. The site has been scrubbing all videos that do not parrot the mainstream media’s official narrative.

In the interview with ABC‘s Good Morning America, Lippel describes the shooter very differently than the image we were shown of Cruz in handcuffs on the ground. “I had a good visual of him. I saw him shoot a barrage of bullets,”  she said. But this teacher isn’t the only one making claims that don’t align with the students turned propagandists for a gun control agenda.

Marjory Stoneman Douglas High School student Alexa says she passed school shooting suspect Nikolas Cruz immediately after the shooting and had a brief exchange with him.  She also said there was, for certain, more than one shooter.

Both of these eyewitness accounts fly in the face of the official narrative the mainstream media is expecting us to digest. By now, it’s evident that the media has an agenda and is working hand in hand with globalists to disarm the good American people with phony narratives and false flag attacks that become immediately about the loss of rights instead of about the gaping holes in their own story.

Police maintain the suspect Nikolas Cruz arrived via an Uber ride at 2:19 p.m. and initiated his attack within 1 minute. If true, that would mean that Cruz would have had to suit up into full metal body armor, put on a full helmet and the whole nine yards, all the while assembling an AR-15 rifle which was purportedly packed into a duffle bag with a number of fully-loaded magazines. [All in under 60 seconds]

One other oddity that was found buried and almost unnoticeable was an interesting detail found in an article in the Chicago Tribune. It claims that police found a kid in a bulletproof vest after the shooting. The student claims his dad, who is a cop, gave him the bulletproof vest.

In the classroom where Mackenzie Hill had been hiding, police broke through the door. As the officers were guiding students out, they noticed something odd: One of the students had put on a bulletproof vest.

The student said he’d been given the vest by his father, a police officer.

Even in the safest city in Florida, he’d brought it to school with him, just in case. –Chicago Tribune

Many ask questions because things continue to not add up. Calling those who want the truth “conspiracy theorists” in order to shut down the argument doesn’t prove the media, who has been caught lying and propagandizing for the government and a globalist agenda many times, is being genuine.