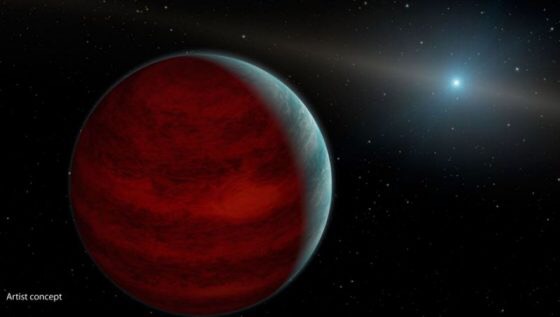 An enormous planet thirteen times the size of Jupiter has been spotted in our very own galaxy. The mysterious planet is it the “heart” of our Milky Way.

The location of this planet is near the “galactic budge”, or center of the spiral galaxy we call home.  The object is thought to be about 13 times the size of Jupiter and at the outside edge of what is classified as a planet. It was spotted using “microlensing,” a process where scientists measure distortions in light when a star passes in front of another star, by the Optical Gravitational Lensing Experiment (OGLE) collaboration.

The planet, known as OGLE-2016-BLG-1190Lb, is 22,000 light years away from Earth and orbits its parent star roughly every three years. Its huge mass puts the object right at the deuterium burning limit – the conventional boundary between planets and brown dwarfs. But researchers are being careful to say that it is possible that this planetary body is a brown dwarf.

Brown dwarfs are objects too big to be a planet but yet are not massive enough to sustain the nuclear fusion which makes stars burn. “We report the discovery of OGLE-2016-BLG-1190Lb, which is likely to be the first Spitzer microlensing planet in the galactic bulge/bar, an assignation that can be confirmed by two epochs of high-resolution imaging of the combined source-lens baseline object,” the researchers wrote.

The discovery of the celestial body could give scientists and researchers more of an opportunity to better understand the universe as we know it.

Contributed by Dawn Luger of The Daily Sheeple.