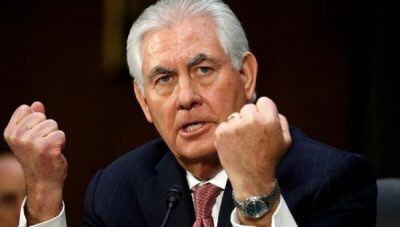 Does anyone in the Trump Administration have a clue about our Syria policy? In March, Secretary of State Rex Tillerson appeared to be finally pulling back from President Obama’s disastrous “Assad must go” position that has done nothing but prolong the misery in Syria. At the time, Tillerson said, the “longer-term status of President Assad will be decided by the Syrian people.”

Those of us who believe in national sovereignty would say that is pointing out the obvious. Nevertheless it was a good sign that US involvement in Syria – illegal as it is – would no longer seek regime change but would stick to fighting ISIS.

Then out of the blue this past week, Tillerson did another 180 degree policy turn, telling a UN audience in Geneva that, “[t]he reign of the Assad family is coming to an end. The only issue is how that should that be brought about.”

The obvious question is why is it any of our business who runs Syria, but perhaps that’s too obvious. Washington’s interventionists have long believed that they have the unilateral right to determine who is allowed to head up foreign countries. Their track record in placing “our guy” in power overseas is abysmal, but that doesn’t seem to stop them. We were promised that getting rid of people like Saddam Hussein and Gaddafi would light the fire of freedom and democracy in the Middle East. Instead it has produced nothing but death and misery – and spectacular profits for the weapons manufacturers who fund neocon think tanks.

In Syria, Assad has been seen as a protector of Christians and other minorities against the onslaught of in many cases US-backed jihadists seeking his overthrow. While the Syrian system is obviously not a Switzerland-like democracy, unlike our great “ally” Saudi Arabia they do at least have elections contested by different political parties, and religious and other minorities are fully integrated into society.

Why has the Trump Administration shifted back to “Assad must go”? One reason may be that, one-by-one, the neocons who opposed Trump most vociferously during the campaign have found themselves and their friends in positions of power in his Administration. The neocons are great at winning while losing.

The real story behind Washington’s ongoing determination to overthrow the Syrian government is even more disturbing. In a bombshell interview last week, a former Qatari Prime Minister confessed that his country, along with Saudi Arabia, Turkey, and the United States, began shipping weapons to jihadists from the very moment Syrian unrest began in 2011. The well-connected Qatari former minister was trying to point out that his country was not alone in backing al-Qaeda and even ISIS in Syria. In the course of defending his country against terrorism charges leveled by Saudi Arabia he has spilled the beans about US involvement with the very groups claimed to be our arch-enemies. As they did in Afghanistan in the 1980s, the CIA supported radical Islamic terrorism in Syria.

Haven’t we done enough damage in Syria? Do we really need to go back to 2011 and destroy the country all over again? The neocons never admit a mistake and never change course, but I do not believe that the majority of Americans support their hijacking of President Trump’s Syria policy. It is long past time for the US to leave Syria alone. No bases, no special forces, no CIA assassination teams, no manipulating their electoral system. We need to just come home.