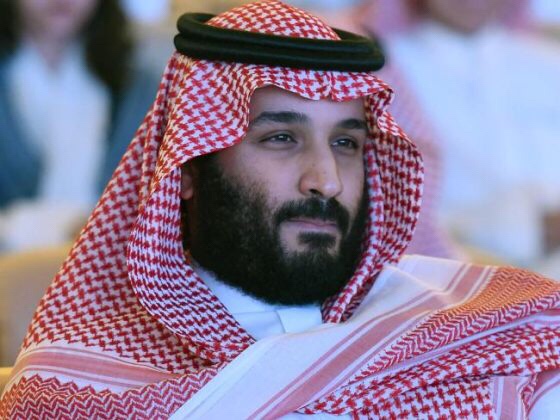 In the latest continuation of western media’s shameless promotion of a known war criminal, the Washington Post sat down with Saudi Crown Prince Mohammed bin Salman (MBS) last Thursday for a 75-minute discussion (even the Post itself previously published an acknowledgment of his crimes).

While the Post’s write-up focuses mainly on the allegation that MBS has Donald Trump’s son-in-law, Jared Kushner, “in his pocket,” the war in Yemen, and the rights of women in the Kingdom, most curious is the second-to-last paragraph of the report, which states the following:

“Asked about the Saudi-funded spread of Wahhabism, the austere faith that is dominant in the kingdom and that some have accused of being a source of global terrorism, Mohammed said that investments in mosques and madrassas overseas were rooted in the Cold War, when allies asked Saudi Arabia to use its resources to prevent inroads in Muslim countries by the Soviet Union.” [emphasis added]

What? Allies asked Saudi Arabia to use its resources — specifically, investments in mosques and madrassas overseas —to prevent countries from forming alliances with the former Soviet Union?

Of course, it was already known that Saudi Arabia was doing just that for decades, but this is the first time the blame has been openly shifted to Western allies in an interview with a major newspaper.

As the Week explained in 2015, Saudi Arabia has spent billions of dollars “investing heavily in building mosques, madrasas, schools, and Sunni cultural centers across the Muslim world. Indian intelligence says that in India alone, from 2011 to 2013, some 25,000 Saudi clerics arrived bearing more than $250 million to build mosques and universities and hold seminars.”

The effects of this policy have been far-reaching. As even pro-war pundit Fareed Zakaria has documented:

“In Southeast Asia, almost all observers whom I have spoken with believe that there is another crucial cause [behind the ‘cancer’ of Islamic extremism] – exported money and ideology from the Middle East, chiefly Saudi Arabia. A Singaporean official told me, ‘Travel around Asia and you will see so many new mosques and madrassas built in the last 30 years that have had funding from the Gulf. They are modern, clean, air-conditioned, well-equipped – and Wahhabi [Saudi Arabia’s puritanical version of Islam].’ Recently, it was reported that Saudi Arabia plans to contribute almost $1 billion to build 560 mosques in Bangladesh. The Saudi government has denied this, but sources in Bangladesh tell me there’s some truth to the report.”

Saudi Arabia’s funding for extremism has even reached as far as the Indian Ocean. According to the New York Times, Saudi Arabia has “for decades spread its conservative strand of Islam in the Maldives by sending religious leaders, building mosques and giving scholarships to students to attend universities.” Is it a mere coincidence therefore that the South China Morning Post reported that Indian intelligence sources are claiming hundreds of Maldivians have joined ISIS in Syria?

We also know from Hillary Clinton’s leaked emails that Saudi Arabia was almost certainly one of ISIS’ prime sponsors — and that the Clinton camp was well aware of this issue.

While this is the first time a prominent figurehead like MBS has admitted not only that Saudi Arabia spreads its Wahhabist strain of Islam across the world but also that it was done at the request of its western allies, there is proof that MBS’ claim is a well-kept secret of former and current American administrations.

“He [the Saudi official] explained that Saudi support for Islamic extremism started in the early 1960s as a counter to Nasserism—the socialist political ideology that came out of the thinking of Egypt’s Gamal Abdel Nasser—which threatened Saudi Arabia and led to war between the two countries along the Yemen border. This tactic allowed them to successfully contain Nasserism, and the Saudis concluded that Islamism could be a powerful tool with broader utility.

“Under their new and unprecedented policy of honesty, the Saudi leadership also explained to me that their support for extremism was a way of resisting the Soviet Union, often in cooperation with the United States, in places like Afghanistan in the 1980s. In this application too, they argued, it proved successful. Later it was deployed against Iranian-supported Shiite movements in the geopolitical competition between the two countries.” [emphasis added]

Contributed by Darius Shahtahmasebi of theantimedia.org.

Darius Shahtahmasebi has completed a Double Degree in Law and Japanese from the University of Otago, with an interest in human rights, international law and journalism. He’s a fully qualified lawyer in two separate jurisdictions, and writes about foreign policy for Anti-Media.