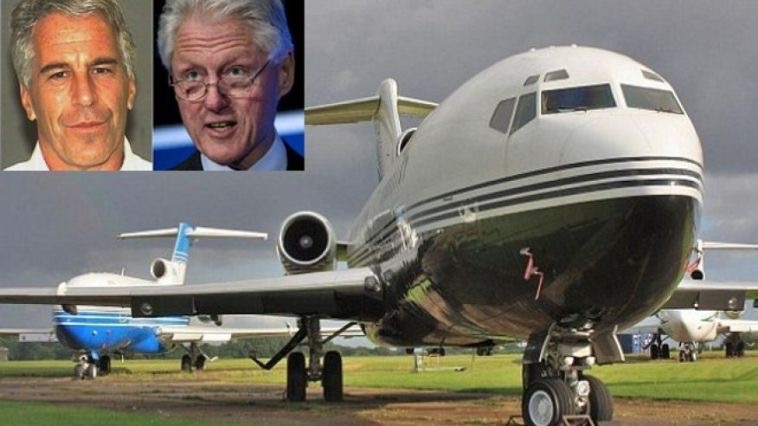 Zerohedge reports that Bongino and former Hillary Clinton aide Nick Merrill started feuding after Merrill challenged Bongino’s claim that Clinton was the most “manipulative political person in a position of power [he had] ever met in my entire life.”

Merrill fired back that Hillary “has enormous respect for the Secret Service & a great relationship with the agents on her detail.” He also alleged that Bongino was never on the Clintons’ detail – a claim that Bongino almost immediately disproved by supplying a photo of him sitting behind Hillary Clinton back in 2001.

This pic is from NY Newsday’s inside cover taken at the US Open in 2001. It’s one of literally hundreds of operations I conducted with Hillary documented throughly by official US govt paperwork of which I still have copies. You’re welcome to stop by & review the paperwork.Thanks. pic.twitter.com/C0lmJRlrDm

Bongino dropped this bomb of a tweet on the Clinton disciple…

“Be careful Nick, people know things not yet released publicly about your messiah Hillary. Don’t poke the bear loser, you may not like the results. #Epstein #EmailGate”

Be careful Nick, people know things not yet released publicly about your messiah Hillary. Don’t poke the bear loser, you may not like the results. #Epstein #EmailGate

Bongino was not done destroying Merrill and the Clintons by tweeting…

“Dear Nick, are you guys sure you know everyone on the Epstein planes?”

Dear Nick, are you sure you destroyed ALL of the Blackberries. Was there govt property in the bunch? #PeopleKnow

The Duran reported in May 2016 that ex-President Bill Clinton was not only fooling around with White House interns, but had been involved in a “boys gone wild” sexcapade with billionaire and convicted sex offender Jeffrey Epstein.

‘I remember asking Jeffrey what’s Bill Clinton doing here kind of thing, and he laughed it off and said well he owes me a favor,’ one unidentified woman said in the lawsuit, which was filed in Palm Beach Circuit Court.

According to The Daily Mail, one woman on the island was an actual sex slave:

Moreover Epstein was invited to Chelsea Clinton’s wedding in 2010, amongst 400 other guests, demonstrating his close friendship with the Clinton family.

Owned by Jeffery Epstein, a wealthy American financier and convicted sex offender, Little St. James Island appears to be somewhat of a gathering place and is a well desired hangout among key figureheads, actors and royalty to the likes of former U.S. President Bill Clinton, Kevin Spacey and even Prince Andrew.

However, the people attending the lavish residence are likely do not go there to discuss “cutting edge scientific and medical research” as the Epstein VI Foundation would like you to believe, but rather go there to experience full-on sexual encounters with underage girls as young as fourteen.

Bill Clinton took at least 26 trips on the Lolita Express, a luxury jet fitted out with beds where prominent elitists allegedly had sex with young girls, ditching his Secret Service detail for 5 of those trips.

Clinton chose to continue his association with Epstein even after, according to the Alliance to Rescue Victims of Trafficking, “everyone within his inner circles knew was a pedophile.”

Zerohedge provides further insight on Jeffrey Epstein, a New York City financier who pled guilty in 2008 to a single count of soliciting sex from an underage girl.

He eventually spent 13 months in prison and was forced to register as a level three sex offender (considered the highest risk of re-offending) though stories of his lust for girls as young of 12 have spread like wildfire in recent years.

Epstein’s predatory past, and his now-inconvenient relationships with a Who’s Who of the Davos set, hit the front pages again earlier this month when one of his victims, Virginia Roberts, claimed in a federal court filing that Epstein recruited her as a “sex slave” at the age of 15 and “sexually trafficked [her] to politically-connected and financially-powerful people,” including Prince Andrew and attorney Alan Dershowitz. (The latter, the filing claimed, had sex with the victim “on private planes”; Dershowitz vigorously denies the charges, as does Prince Andrew.)

Two female associates of Epstein—the socialite Ghislaine Maxwell and Epstein’s former assistant Sarah Kellen—have been repeatedly accused in court filings of acting as pimps for him, recruiting and grooming young girls into their network of child sex workers, and frequently participating in sex acts with them. Kellen in particular was believed by detectives in the Palm Beach Police Department, which was the first to start unraveling the operation, to be so deeply involved in the enterprise that they prepared a warrant for her arrest as an accessory to molestation and sex with minors. In the end, she was never arrested or charged, and federal prosecutors granted her immunity in a 2007 non-prosecution agreement that described her as a “potential co-conspirator” in sex trafficking.

Maxwell, the daughter of the late media mogul Robert Maxwell, has been accused by Roberts of photographing Epstein’s victims “in sexually explicit poses and [keeping] the child pornography on her computer,” and “engag[ing] in lesbian sex with the underage females she procured for Epstein.” She has denied the allegations in the past.

Clinton shared Epstein’s plane with Kellen and Maxwell on at least 11 flights in 2002 and 2003—before any of the allegations against them became public—according to the pilots’ logbooks, which have surfaced in civil litigation surrounding Epstein’s crimes. In January 2002, for instance, Clinton, his aide Doug Band, and Clinton’s Secret Service detail are listed on a flight from Japan to Hong Kong with Epstein, Maxwell, Kellen, and two women described only as “Janice” and “Jessica.” One month later, records show, Clinton hopped a ride from Miami to Westchester on a flight that also included Epstein, Maxwell, Kellen, and a woman described only as “one female.” 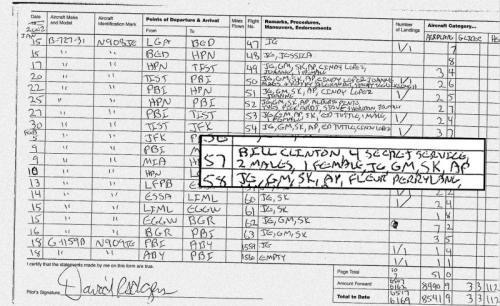 According to Zerohedge, Clinton recruited Epstein to make his plane available for a week-long anti-poverty and anti-AIDS tour of Africa with Kevin Spacey, Chris Tucker, billionaire creep Ron Burkle, Clinton confidant Gayle Smith (who now serves on Barack Obama’s National Security Council), and others. The logs from that trip show that Maxwell, Kellen, and a woman named Chauntae Davis joined the entourage for five days. 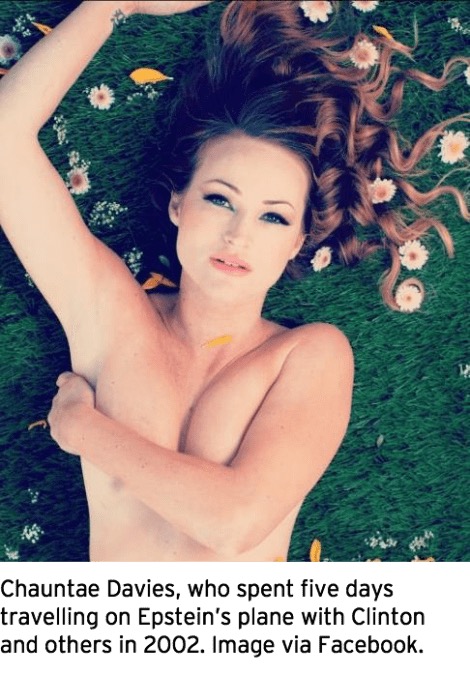 That last name, Chauntae Davies, emerged elsewhere in papers unearthed by the various investigations into Epstein’s sex ring: his little black book. Davies is one of 27 women listed in the book under an entry for “Massage- California,” one of six lists of massage girls Epstein kept in various locales, with a total of 160 names around the globe, many of them underage victims.

Today, Davies is an actress with credits including HBO’s Enlightened. In 2002, she was 23. According to her IMDB profile, in addition to her apparent massage work for Epstein, she landed a role that year as a “lingerie model” in Exposed, a movie produced by a softcore porn company called MRG Entertainment. (Other MRG films include Deviant Desires and Carnal Confessions; the company has since been purchased by Larry Flynt. Exposed, appropriately enough, was directed by a pseudonymous auteur who went by the name of Clinton J. Williams.) Davies’s role in Clinton’s flying AIDS-prevention circus isn’t clear, and though her LinkedIn page claims a certificate in Swedish massage, there is no evidence that she ever actually treated Epstein to one. Reached via e-mail, she said only, “I really am not interested in being slandered in the media for having known this person a time ago. Some of the things being said are not things I have information on.“