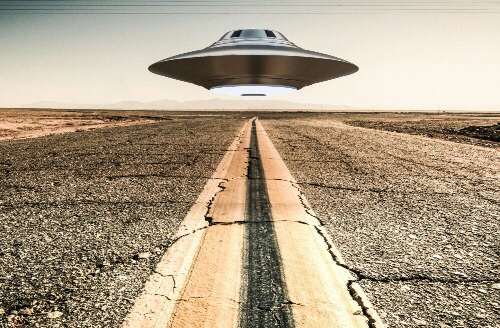 On February 24, a Learjet pilot first reported the mysterious object to air traffic control while flying over the desert.

“I don’t know what it was,” the pilot says. “It wasn’t an airplane… it passed us going in the opposite direction.”

The sighting prompted air traffic controllers to ask a nearby pilot if they noticed anything passing over the aircraft. The commercial pilot flying a passenger jet for American Airlines, confirmed the UFO was flying above the aircraft at 40,000 feet and “had a big reflection.”

“Something just passed over us, like a, don’t know what it was, but it was at least two, three thousand feet above us,” he said. “Yeah it passed right over the top of us.”

Other pilots that could hear the curious transmission chimed in to ask if the object was a “Google balloon,” to which another pilot replied “doubtful.” Another can then be heard saying rather matter-of-factly, “UFO.”

“We have no comment beyond what you hear,” said FAA spokesperson Lynn Lunsford to RT.com. “Other than the brief conversation between two aircraft, the controller was unable to verify that any other aircraft was in the area”.

Lunsford also said the agency has a “close working relationship” with all other military and civilian aircraft operating in that area every day “including high-altitude weather balloons.”