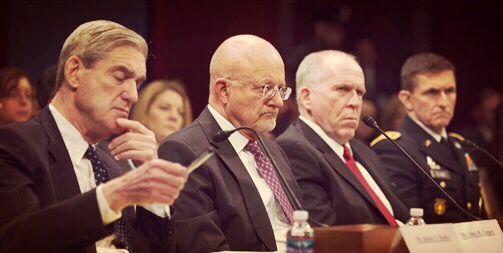 Robert Mueller is supposed to be investigating Russiagate, which has been shown to be a hoax concocted by former CIA director John Brennan, former FBI director James Comey, and current deputy Attorney General Rod Rosenstein. As Russiagate is a hoax, Mueller has not been able to produce a shred of evidence of the alleged Trump/Putin plot to hack Hillary’s emails and influence the last presidential election.

With his investigation unable to produce any evidence of the alleged Russiagate, Mueller concluded that he had to direct attention away from the failed hoax by bringing some sort of case against someone, knowing that the incompetent and corrupt US media and insouciant public would assume that the case had something to do with Russiagate.

Mueller chose Paul Manafort as a target, hoping that faced with fighting false charges, Manafort would make a deal and make up some lies about Trump and Putin in exchange for the case against him being dropped. But Manafort stood his ground, forcing Mueller to go forward with a false case.

Manafort’s career is involved with Republican political campaigns. He is charged with such crimes as paying for NY Yankee baseball tickets with offshore funds not declared to tax authorities and with attempting to get bank loans on the basis of misrepresentation of his financial condition. In the prosecutors’ case, Manafort doesn’t have to have succeeded in getting a loan based on financial misrepresentation, only to be guilty of trying. Two of the people testifying against him have been paid off with dropped charges.

Mueller’s investigation is restricted to Russiagate. In other words, Mueller has no mandate to investigate or bring charges unrelated to Russiagate. In my opinion, Mueller gets away with this only because the deputy Attorney General is in on the Russiagate plot against Trump. Mueller and Rosenstein know that they can count on the presstitutes to continue to deceive the public by presenting the Manafort trial as part of Russiagate.

The trial judge has twice criticized the prosecutors, asking them on one occasion if they had any evidence of successful fraud. In other words, the judge can tell the difference between actual fraud and a failed attempt at fraud, a distinction the prosecutors don’t want the jury to consider.

However, prosecutors can frame a judge, just as they are trying to frame the presidents of the United States and Russia. Realizing that, the judge backed off.

What the Manafort trial should tell you is how utterly and totally corrupt the United States is. In my opinion there is nowhere an organization as corrupt as the US Dept of Justice (sic).

That Russiagate continues on its corrupt course should tell you how powerless President Trump is. Trump cannot even influence his own Department of Justice, which is doing its best to destroy him.

Contributed by Paul Craig Roberts of Institute for Political Economy