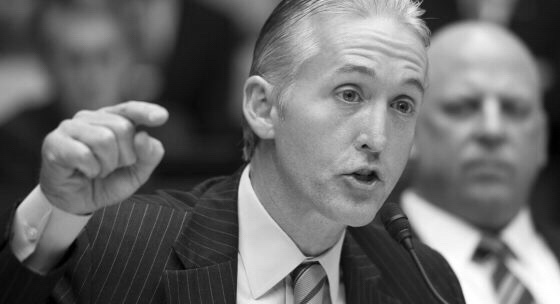 Republican representative, Trey Gowdy from South Carolina said that in 18 months, he has not seen “one scintilla” of evidence that Donald Trump colluded with Russia.  He added that if that evidence existed, we could all be rest assured that it would have been leaked by now.

Since leaks from the White House are not few and far between since Donald Trump has taken office, Gowdy is likely onto something here. There are leaks about everything and regarding everything.

Leaks to the media have plagued Trump’s presidency since his first day in office, and a new report on leakers’ motives opens a window into the extent of the subterfuge. “To be honest, it probably falls into a couple of categories,” one White House official told Axios‘s, Jonathan Swan. “The first is personal vendettas. And two is to make sure there’s an accurate record of what’s really going on in the White House.”  Many of those with ties and puppet strings connecting them to the deep state are actually in Trump’s White House, according to The Washington Post.

A wave of leaks from government officials has hobbled the Trump administration, leading some to draw comparisons to countries like Egypt, Turkey, and Pakistan, where shadowy networks within government bureaucracies, often referred to as “deep states,” undermine and coerce elected governments. Though leaks can be a normal and healthy check on a president’s power, what’s happening now extends much further.

A former White House official who, according to Swan, “turned leaking into an art form,” said that “leaking is information warfare; it’s strategic and tactical — strategic to drive [the] narrative, tactical to settle scores.” –SHTFPlan

And Gowdy seems to see the writing on the wall.  Who was that said, “a lie told often enough times becomes the truth?” (It was infamous Marxist Vladimir Lenin, FYI).  That appears to be exactly what Democrats and their lapdogs in mainstream media continue to propagate. If they just repeat that Trump and Russia colluded enough times, the people will eventually buy that lie without any evidence.

“I have not seen one scintilla of evidence that this president colluded, conspired, confederated with Russia, and neither has anyone else, or you may rest assured Adam Schiff would have leaked it,” Gowdy said on Fox News Sunday as reported by The Daily Wire.

Adam Schiff, a California Democrat, has been among the most vocal of Trump haters. As head of the House Intelligence Committee, Schiff is privy to a lot of information that others are not and leaks of information have streamed out of the committee. “That’s why they’ve moved off of collusion onto obstruction of justice, which is now their current preoccupation,” Gowdy added alluding to the fact that if there was evidence of collusion, the public would have seen it months ago

Gowdy, though, noted that after 18 months, there’s been no evidence of any crime committed. And now, the probe led by special counsel Robert Mueller appears to moving into the sex realm. Trump’s former lawyer, Michael Cohen, reportedly recorded a conversation with Trump about a former Playboy model who claims Trump once had an affair with her.

That latest revelation, of course, has already leaked. So it does make sense: If anyone had anything on Trump, it’d already be out there. –The Daily Wire