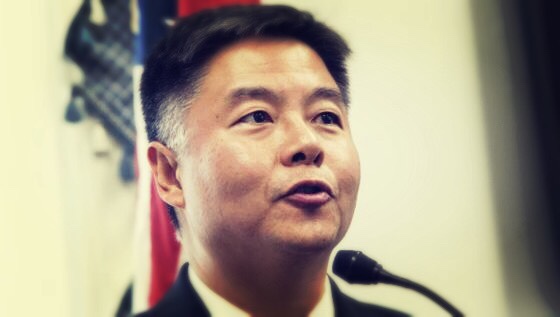 One California Democrat has finally admitted what we all knew, that politicians in government want to end free speech permanently. Representative Ted Lieu said he would “love to be able to regulate the content of speech” during an interview Wednesday.

Lieu admitted that the only reason the government hasn’t punished people for free speech yet is the first amendment.  It seems like the United States government and the die-hard statists that vote for these Communists have learned nothing from the Nazis or the Soviet Union.  Violently controlling speech (which is exactly what regulation of speech would be) is one of the most egregious of human rights violations.

According to The Free Beacon, Lieu got a lot of attention a day earlier when Google CEO Sundar Pichai testified at a House Judiciary Committee hearing. Pichai took to assailing conservative claims of the tech giant’s bias against them by reading positive and negative stories about Republican Representatives Steve Scalise of Louisiana and Steve King of Iowa, the latter of whom has repeatedly courted controversy with racially charged remarks.

According to Fox News, after CNN host Brianna Keilar praised Lieu for the “clever” stunt during the testimony, she wondered if Democrats should have used more of their time to question the Google leader about how it and other tech companies can work to prevent the spread of conspiracy theories and other online trolling.  Meaning, Keilar wants people who say things she dislikes or doesn’t believe to be shut down.  She wants to kill freedom of speech for good, not unlike Adolf Hitler.

But for now, at least even though the Nazis in charge obviously want more power and to strip any and all rights from everyone else, Lieu admitted he can’t (yet) regulate speech. “It’s a very good point you make,” Lieu said. “I would love if I could have more than five minutes to question witnesses. Unfortunately, I don’t get that opportunity. However, I would love to be able to regulate the content of speech. The First Amendment prevents me from doing so, and that’s simply a function of the First Amendment, but I think over the long run, it’s better the government does not regulate the content of speech.”

I agree there are serious issues, but the speech issues are protected by the First Amendment. Would I like to regulate Fox News? Yes, but I can't because the First Amendment stops me. And that's ultimately a good thing in the long run.

In the interim, however, Lieu will find it perfectly acceptable if Google and Facebook regulate speech and censor on behalf of the government.  It is utterly terrifying that we live in times where people are actually demanding that the government take away free speech and basic fundamental human rights so all can be enslaved by the government.

If people allow the government to regulate free speech, then it isn’t free speech.