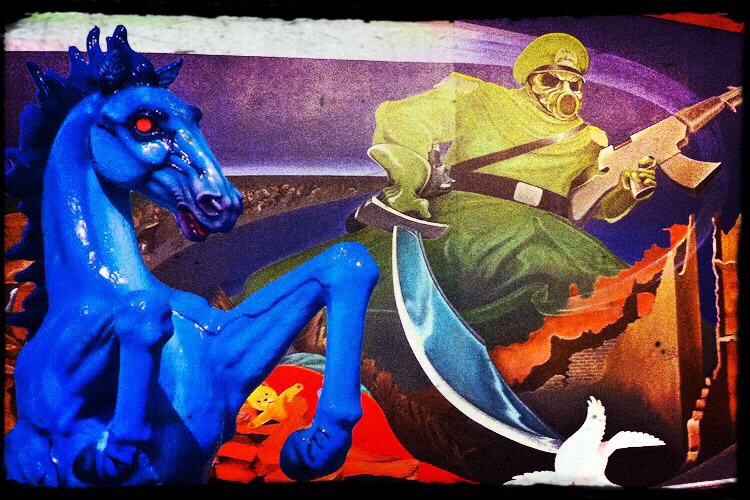 We live in a culture cartooned in memes. Symbolic imagery that once held power in the minds of the masses can now be folded over and onto itself ad infinitum, becoming overused, watered-down and sometimes comedic versions of the original form.

Take for example the 2017 Belluminati ad campaign from Taco Bell, where a television commercial parodies the Illuminati symbolism so ubiquitous in our government and culture. It’s actually pretty hilarious, and once you have a good laugh over something like this, it’s just hard to take it seriously again. Which is really the point. We’re not supposed to take any of this seriously.

The Denver International Airport (DIA) is well-known for the dark, symbolic artwork found all over the premises including a massive demon horse statue (popularly known as Blucifer), gargoyles, and most notably, the murals of Mexican artist Leo Tanguma. 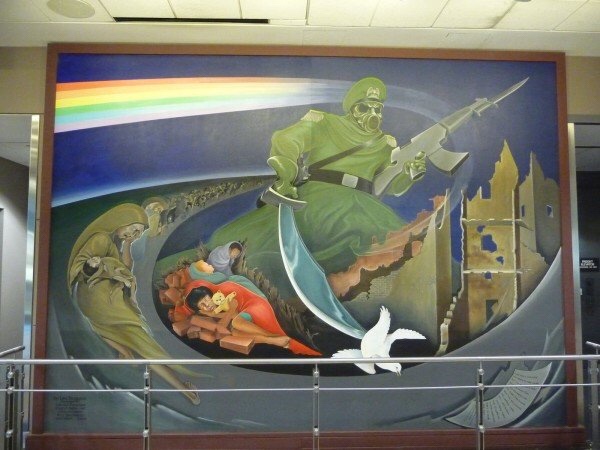 The imagery in all of this is undeniably sinister and dark, promoting themes of genocide, ecocide and mass murder, and while artist Tanguma has publicly explained that his intentions behind these murals has been misunderstood, the entire body of art and circumstances surround DIA is quite disturbing, similar to the Georgia Guidestones which outline a plan to reduce the world’s population by ninety percent.

“YOU MAY OR MAY NOT HAVE HEARD.

DEN’S GOT SOME SECRETS.

SINCE THE AIRPORT’S OPENING IN 1995, THERE HAVE BEEN ENDLESS RUMORS AND THEORIES. PEOPLE SAY OUR UNDERGROUND TUNNELS LEAD TO SECRET MEETING FACILITIES FOR THE WORLD’S ELITE. OUR BLUE HORSE IS THOUGHT TO BE CURSED. SOME BELIEVE WE ARE CONNECTED TO THE NEW WORLD ORDER AND THE FREEMASONS. SOME PEOPLE EVEN SAY THAT WE ARE HOME TO A COLONY OF LIZARD PEOPLE.

THE AIRPORT WAS BUILT BY THE NEW WORLD ORDER

Naturally. People think this because a dedication marker and plaques around the airport claim it was funded by “The New World Airport Commission.”

Never heard of them? Don’t feel left out–it seems no one has. After some digging, it was discovered that no such group exists. Not now. Not when the airport was built. Not ever. So rather than writing it off as nothing, people have jumped to the conclusion that it is actually a group within the New World Order.

THE AIRPORT CONTAINS THE ILLUMINATI HEADQUARTERS

Remember those plaques we just talked about? Well, there’s one placed over a time capsule that also has a Masonic square, a compass symbol, and an inscription that gives the time capsule’s contents to the “people of Colorado in 2094”–all symbols of Freemasonry, and yes, the Illuminati.

Additionally, the airport building costs were more expensive than originally thought. Theorists believe this money went to building the headquarters. Rumor has it, they screwed up the first few buildings and instead of getting rid of them, they buried them and built on top of them to make one super-cool, super-secret underground lair.

THE ARTWORK CONTAIN CLUES TO THE APOCALYPSE

You’ve seen them. You’ve given them a many confused looks, wondering why? How? What? Really? They’re the interesting pieces of art decorating the airport: The glaring gargoyle sculptures, the big blue horse sculpture and, perhaps most notably, the 28-foot-wide murals.

It is theorized that these are clues to the sinister influence of the airport–the aforementioned Freemasons, Illuminati and New World Order. The blue horse’s glowing eyes are often interpreted as reference to the Four Horsemen of the Apocalypse. Plus, its creator Luis Jiménez died while making it.

SPEAKING OF THE APOCOLYPSE… WE’RE READY FOR IT

In addition to the Illuminati HQ, it is rumored there are several underground baggage tunnels just waiting to house the world’s elite when the world comes to an end. Lizard people (aka “Reptoids”) and evidence of aliens are also thought to be down there (apparently they’ve been drawing on the walls). Silly aliens, stop with your graffiti.” [Source] 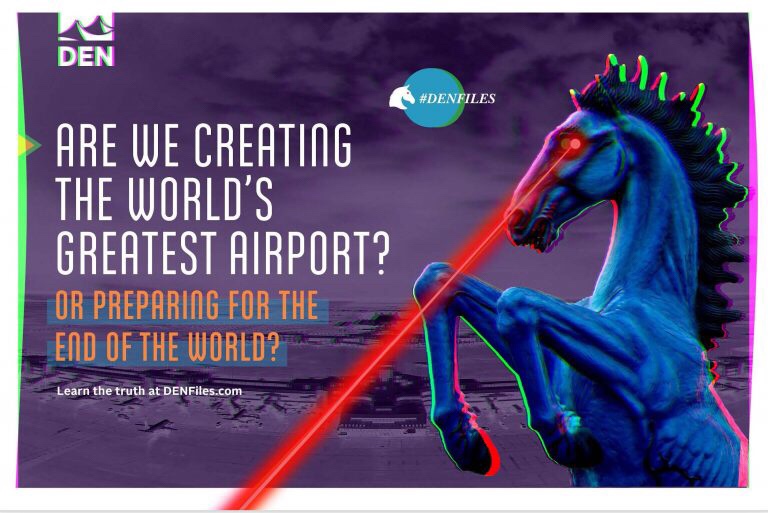 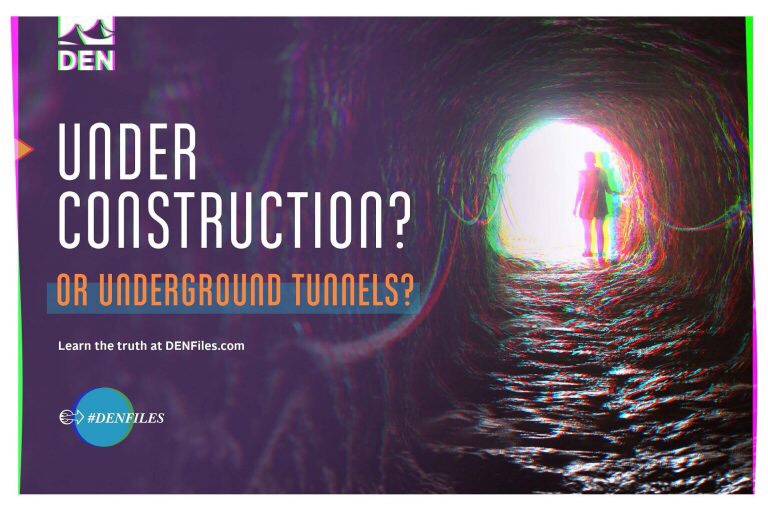 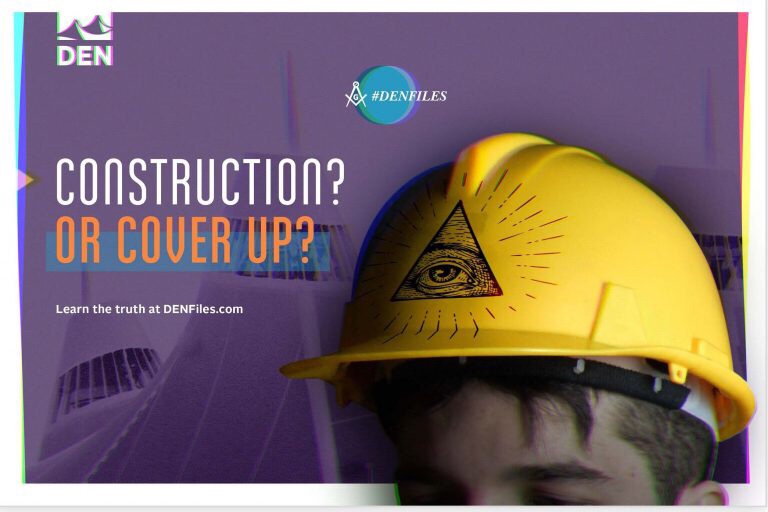 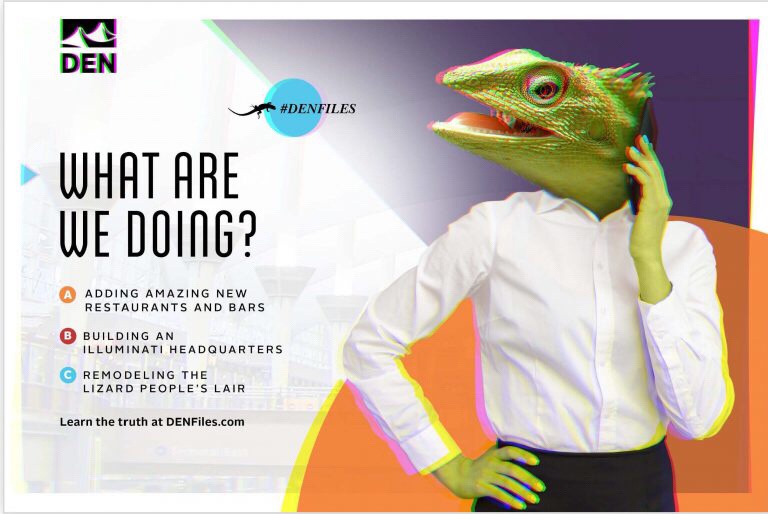 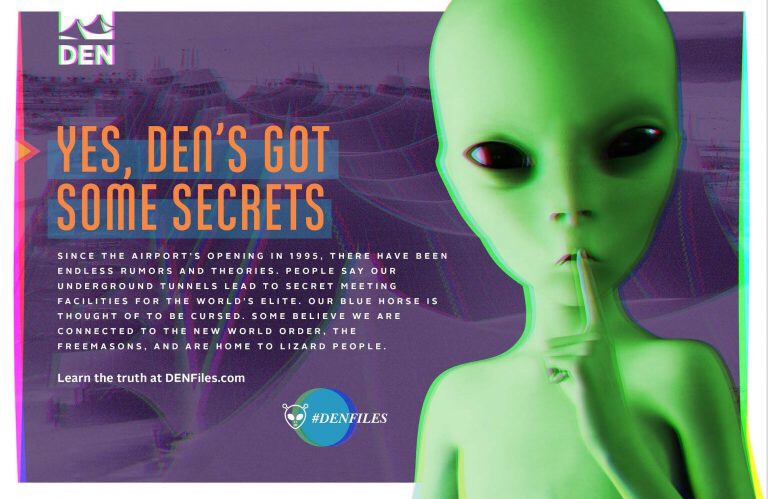 Ok, so, their marketing firm is rather creative and all, just as Taco Bell’s. Great job. The real effect here other than a laugh, however, is the Jedi mind trick of stopping inquiry into the nature of the symbols and why they are so omnipresent in our culture anyways.

As reported by Vigilant Citizen:

“The campaign is somehow reminiscent of Taco Bell’s “Belluminati” ads which ridiculed “conspiracies” about the dollar bill – although they’re factually true. It appears to follow the same recipe: Distorting theories to the point they become ridiculous to then make fun of that distortion they’ve created.

While the DIA’s campaign is about the massive renovations taking place in its Great Hall, there’s clearly a conscious effort to dispell the various theories that have been circulating for years.

Instead of making fun of people for wanting to understand the “art” inside the buildings they fund and use, how about explaining them in a rational matter. Just, like, explain this mural. Explain why it is inside an airport.” [Source]

It really was just a matter of time before Illuminati, Satanic, and Occult symbolism became so pervasive that it all became symbols of consumerism. Nike just pulled off

something similar with Colin Kaepernick.

Buck Rogers is the earth-bound incarnation of that familiar part of our timeless cosmic selves, the rebel within. He is a surfer of ideals and meditates often on the promise of happiness in a world battered by the angry seas of human thoughtlessness. He is a staff writer for WakingTimes.com.

This article (Denver International Airport Trolls Conspiracy Theorists in New Ad Campaign) was originally created and published by Waking Times and is published here under a Creative Commons license with attribution to Buck Rogers and WakingTimes.com.