Once again, the criminal actions in this country continue without any justice being brought.  Now, why is that?  It now looks like BlackLivesMatter.com is nothing more than an international money laundering outlet for the Democrat National Committee.  In a recent report, donations, including international funding to BlackLivesMatter.com eventually end up in the hands of the DNC.

According to its own About section of the website, BlackLivesMatter.com states:

#BlackLivesMatter was founded in 2013 in response to the acquittal of Trayvon Martin’s murderer. Black Lives Matter Foundation, Inc is a global organization in the US, UK, and Canada, whose mission is to eradicate white supremacy and build local power to intervene in violence inflicted on Black communities by the state and vigilantes. By combating and countering acts of violence, creating space for Black imagination and innovation, and centering Black joy, we are winning immediate improvements in our lives.

Furthermore, they are not only understood to be “global,” but also “international.”

Wikipedia’s description of BLM is:

Black Lives Matter (BLM) is an international human rights movement, originating from within the African-American community, which campaigns against violence and systemic racism towards black people. BLM regularly holds protests speaking out against police brutality and police killings of black people, and broader issues such as racial profiling, and racial inequality in the United States criminal justice system.[1]

Joe Hoft points out that the money the website takes in goes through a middle man, ActBlue, and that ActBlue supports the DNC.

When you click on the “Donate” button on blacklivesmatter.com you are sent to an “ActBlue” donations page:

You can even read that the donations are being made to ActBlue in the fine print. 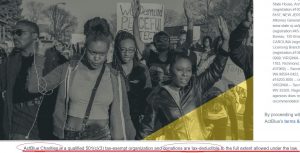 ActBlue has several entities under the overarching name ActBlue.  The terms and conditions of the charity arm of the organization mention “Campaign Finance Laws”:

When you research the expenditures of the ActBlue PAC, all of their contributions are directly going to top DNC campaigns: 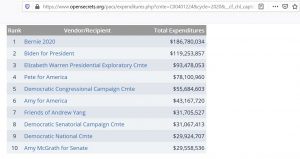 While ActBlue has a charity arm, it also includes a PAC and a 501(c)4.

It appears more accurately to be a funding arm of the DNC.

(Do all the individuals around the world know that when they donate to Black Lives Matter, they are also helping to fund an organization that supports the Democrat Party?)

This is just another corrupt wing of the Democrat Party.

The obvious question should be, why is no one in a position of authority doing anything to put a stop to it?  Is it because many in those positions are just as corrupt as those involved in this money laundering scheme?  Probably so.

Originally published by Tim Brown at Sons of Liberty Media.