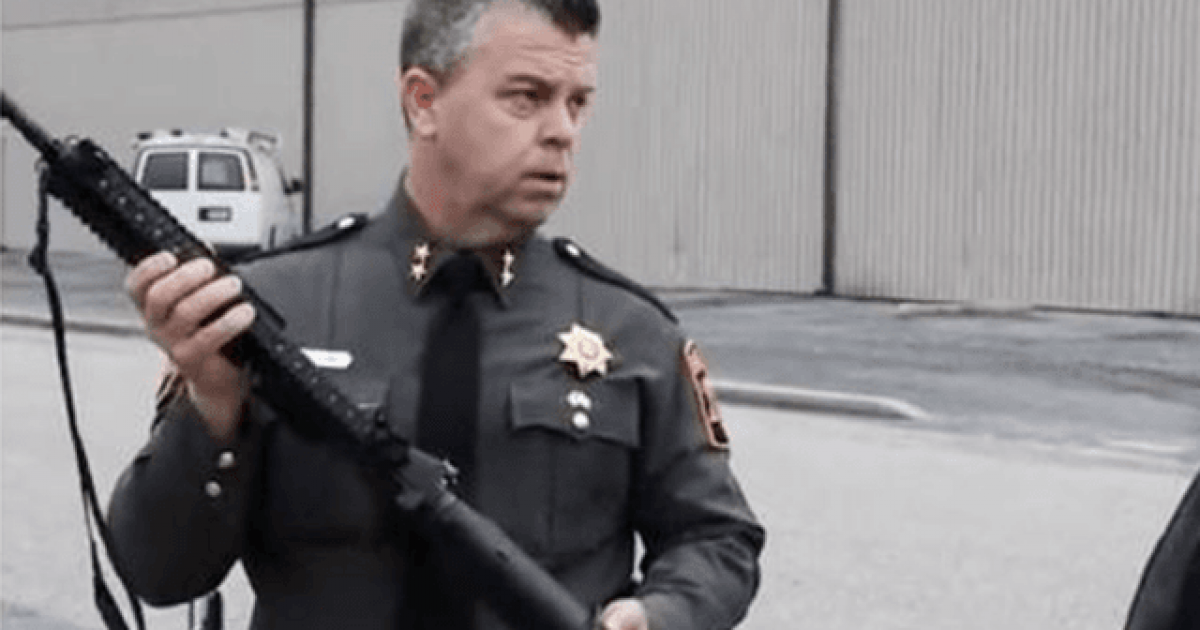 In a state that has already implemented unconstitutional and unlawful “red flag” laws, Wicomico County, Maryland Sheriff Mike Lewis has stated that he and his deputies absolutely will not comply with Maryland representatives’ “pretended legislation” of long gun licensing and gun confiscation “laws.”

According to Delmarva Now:

Legislators heard testimony from constituents and public officials during a hearing on Monday that addressed 19 different bills related to firearms. When speaking to a room of people after testifying, Lewis reiterated his thoughts on these bills.

“We’re gonna let them know that we are sick and tired of being penalized for Baltimore City’s inability to control crime,” Lewis told the room in a video that circulated on social media. “If these bills pass, we will not comply.”

Lewis told Delmarva Now on Tuesday that he testified in Annapolis as the sheriff of Wicomico County and not as a representative for the Maryland Sheriffs Association, which has not taken positions on any gun-related legislation.

Wow!  I love when people in authority actually buck against the corrupt, demonic and Communistic system that seems to encroach on the God-given rights we have as those made in the image of God.

The mission statement for the Wicomico County Sheriff’s Office states that its members work “to enforce the law impartially.”

Well, what is being put forth is not “law.”  It’s “pretended legislation” because it seeks to undermine the right of the people, which are not up for debate and not up for restriction or regulation under the law.  For those of you who think different, not only do you need to read your Bibles, but you need to read the Declaration of Independence.

Sheriff Lewis has been working in law enforcement for 35 years.  However, the hypocrisy comes in the fact that he said he was not opposed to every piece of gun legislation that has been introduced to the Maryland General Assembly. Rather, he only raises issue with the bills that would “further encroach or infringe upon law-abiding citizens’ right to bear arms.”

Delegate Vanessa Atterbeary, D-13-Howard, House Bill 786 would require a person to obtain a license in order to purchase or otherwise acquire shotguns or rifles — also known as long guns. Currently, in the state of Maryland, residents only need a license to have a handgun.

While the bill text does not explicitly mention confiscation of unlicensed long guns, it does say violators could face five years in prison and up to $10,000 in fines.

No, but confiscation is the end result because once you violate the law, what happens to the guns?  They are confiscated.  This is why every single “law” that is advanced should not be termed as “gun control,” but rather gun confiscation.

Police One reports that Maryland’s House Bill 786 “would regulate shotguns and hunting rifles similarly to handguns.”

These Communists want to create a license for long gun ownership and require a universal background check, which is also unconstitutional for long gun sales and purchases.

WBOC spoke with Sheriff Lewis on Tuesday, who says he’s sticking with his guns.

“Our citizens deserve to be protected,” Lewis said.

Somerset County Sheriff Ronnie Howard joined Lewis in Annapolis and says he also does not plan on enforcing the bill even if it passes. Howard agrees with Lewis that the gun control measure is unconstitutional and says guns can provide safety for people in remote areas.

“It would be very dangerous for someone to turn in their weapon, living in a very remote area and someone else trying to break into their house. I can’t. I’m not. They need it for protection,” Howard said.

But Sheriff Lewis’ statements are triggering concerns for activists like Jamaad Gould of the Maryland Progressive Caucus. Gould argues Sheriff Lewis is failing to do his job as an elected leader.

“How do you expect to garner the respect of the community and the trust of the community when you’re saying we’re above you guys, we’re not abiding by the same laws that we’re going to force you to abide by? That’s an issue all the way around,” Gould said. “In my personal opinion, he should resign.”

But Sheriff Lewis says he’s not backing down.

“I will stand up against it,” Lewis said.

That’s not true.  When the “law” undermines the law that is written to protect the people, it is unlawful and therefore, Mr. Frosh is an enemy of the people of his state.  He is not upholding his own oath to uphold the true law, not a manufactured, Communist, gun-grabbing “law,” which is no law at all.

While the bill doesn’t actually detail gun confiscation, “it does allow the Department of State Police to create regulations to carry out the law.”

That means, gun confiscation. Keep that in mind with every single gun legislation that comes down the pipe.

Red flag laws, which have been endorsed by President Donald Trump, led to the death of an innocent American in the state of Maryland at the hands of two brownshirts “just following orders.”

Thanks, Sheriff Lewis for standing against this. Please, stand against all restrictions and regulations against the right of the people to keep and bear arms.