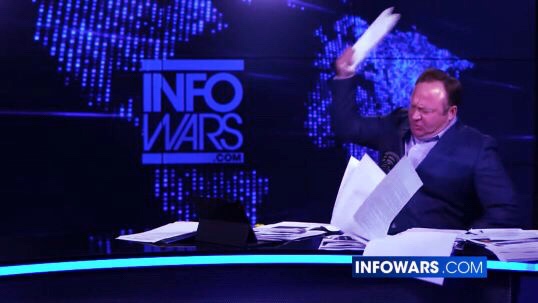 Today, tech giants Google / YouTube, Apple, Spotify, Stitcher and Facebook all simultaneously blacklisted Alex Jones and InfoWars. This coordinated, illegal censorship is clear proof of an organized criminal racket being conducted by the tech giants. The RICO Act allows for federal prosecution of such criminal conspiracy.

The internet Dark Ages has now descended upon us, where radical left-wing tech giants run by deranged, mentally ill communists will decide whether your content qualifies as “hate speech.” What is hate speech? It’s anything uttered by a conservative.

No due process, no appeal, no transparency of the evidence against you, no ability to present evidence in your defense, no means of recourse, nothing…

Even if you didn’t support Alex Jones before all this, we must all stand with the right of Alex Jones to speak.

As expertly explained at All News Pipeline:

The same liberal media that has been bitterly whining about their First Amendment right of a free press for the last week, claiming that is somehow endangered because rally attendees screamed #CNNSUCKS at them, are now celebrating the decision by Facebook to permanently remove Alex Jones and InfoWars pages from their platform on the same day that Apple has removed the entire library for five of Infowars’ six podcasts from its iTunes and Podcast apps.

This comes just days after YouTube removed multiple Alex Jones videos and gave him a community strike for alleged “hate speech,” which is the catch-all excuse being used by Apple, Facebook, and Spotify as their justification to silence him. A YouTube strike effectively prevents Jones from livestreaming his broadcasts on the platform. (I just clicked the Alex Jones Channel on YouTube, and received the message “This account has been terminated for violating YouTube’s community standards.”)

Apple, Spotify, Facebook and YouTube all banned Infowars within 12 hours of each other, illustrating how last night’s purge was a coordinated effort and has nothing to do with these platforms enforcing “hate speech” rules.

I don’t care if one agrees with Alex Jones or disagrees with him, if they love him or hate him, this coordinated attack against him and his InfoWars broadcasts and social media presence should severely concern everybody that sees the abusive liberal media bias and uses Independent Media to find information the establishment media won’t report.

Mike Adams’ official statement on the censorship of Alex Jones

Here’s my full statement, where I openly call for the arrest and criminal prosecution of the executives running the tech giants.

See the full video at this REAL.video link, or watch below:

Contributed by Mike Adams of NaturalNews.com