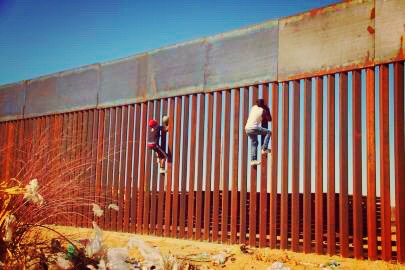 If Donald Trump wants a wall on the border, maybe he can ask Sheldon Adelson to chip in to pay for it. Adelson knows all about walls. His people in Israel built one to keep the Palestinians in their ghettos.

If the corporate news can be believed, Trump will take relief money earmarked for Puerto Rico and Texas to build his wall.

It’s all ego at this point. Trump has been humiliated by his inability to get a wall. It’s personal for him. Trump’s not concerned about a few billion dollars spent on a bad idea that will do little to stop illegal immigration.

TRUMP, on declaring a national emergency: "If we don't make a deal with Congress, most likely I will do that. I would actually say I would. I can't imagine any reason why not. Because I'm allowed to do it. The law is 100 % on my side." pic.twitter.com/TP46PnyPxp

If the US didn’t muck around in Central and South America, supporting tyrants and training deaths squads to make investment safe for international banks and transnational corporations, there wouldn’t be mass migration of refugees fleeing US foreign policy.

If the state hadn’t declared a war on drugs—these guys love wars of all stripe—there wouldn’t be murderous cartels, first in Colombia, and now in Mexico. Drug money floats economies, including ours. Wakovia and other banks have made a fortune laundering drug money. Obama supported the Sinaloa cartel and played it off against its rivals, going so far as sending arms to narco terrorists.

Trump’s mulling of a “national emergency” (the pretext set with 9/11) isn’t included in the Constitution. It is an outrageous expansion of the imperial presidency.

There isn’t a crisis on the border—the murder rate here is much lower than say in Chicago or Baltimore—a fact I am able to confirm. I live forty miles from Mexico.

The argument for a wall is quite frankly bullshit. It was a selling point during the presidential campaign. It is now a battle to save face and elevate Trump’s personality. There are several more pressing issues—namely: illegal wars, a bankster manipulated monetary system, and a national debt that will flatten the country… and sooner before later.

Let’s see if Trump declares a national emergency—despite there not being an actual crisis or emergency—and let’s see what else he does with this awesome and illegal authority.

I fear a bit of Caliguia in Donald Trump.

Originally published by Kurt Nimmo at Another Day In The Empire.