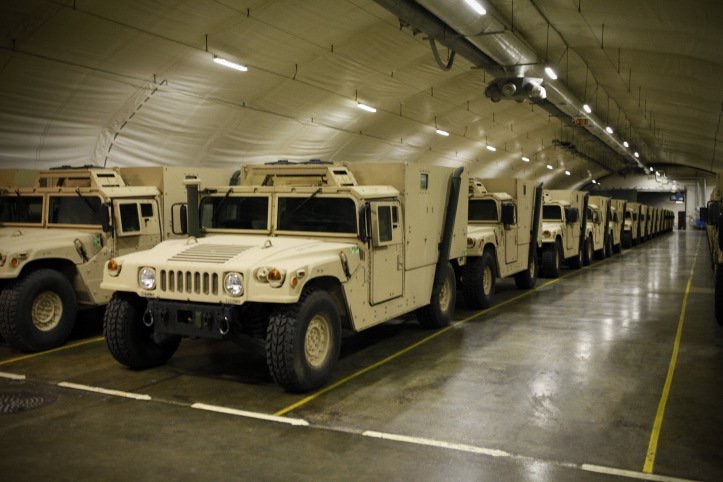 Featured image: Humvees are stored inside the Frigaard Cave in central Norway. The cave is one of six caves that are part of the Marine Corps Prepositioning Program-Norway, which supports the equipping of Marine Expeditionary Brigade consisting of 15,000 Marines and with supplies for up to 30 days. (U.S.

US Militarization of Scandinavia: Less Than a Year After First US Base in Norway, a Second One in the Offing

In these days, when the Nobel Peace Prize was awarded to the International Campaign to Abolish Nuclear Weapons (ICAN), it might be worth having a look at what the Norwegian military actually is up to.

In January 2017, the first US Marine Corps base in Norway became operational. It is located in Værnes, in the middle of this long rugged country. The base agreement is notionally on a ‘temporary rotating basis’. Norwegian politicians, with a straight face, insists the 330 Marines are always approved only for six months at the time, even though US budget documents clearly show that the Marine Corps routinely budget for this base several years ahead.

Now there are rumours of the establishment of a second US Marine Corps base, this time several hundred kilometres closer to the Russian border. The location mentioned  is Setermoen, a major hub for the Norwegian forces. The Ministry of Defence have as usual issued a denial, but it is confirmed that general Robert Neller, supreme commander of the US Marine Corps, was shown round the garrison area last week. The timeframe mentioned is a rather hurried stationing sometimes in 2018. The budget document also mentions building of hangars. Værnes is indeed next to an airport, but the use of  ‘location TBD’, could indicate the planning of a third base, possibly Evenes airport, close to Setermoen.

Since NATO was founded in 1949, the country has to some degree followed a policy of caution. Norway will not “conclude any agreement with other states which imposes obligations on Norway to open up bases for foreign powers’ forces in Norwegian territory, as long as Norway is not attacked or threatened with attacks”, as the policy was formulated. It lasted the entire cold war, but with the new base in January 2017, things have changed.

The old concept was essentially a straightforward one – the Norwegian army would be responsible for the defence of Norway. In the last few years, and  in the planning for the coming ones, this concept is scrapped. A new concept, of close integration and intermeshing with foreign armies, is replacing it. This is a trend in many European  armies.

For example, the Norwegian army has a unit stationed  in Lithuania, and contingents with the NATO-rapid reaction force. As a replacement, foreign troops will be stationed in Norway. There is talk of joint headquarters in the NATO framework As a result, the budget for the Home Guards will be slashed. Several top military leaders have complained that such priorities will hollow out the core duty of territorial defence.

Another example are the choices made in purchasing  new equipment. 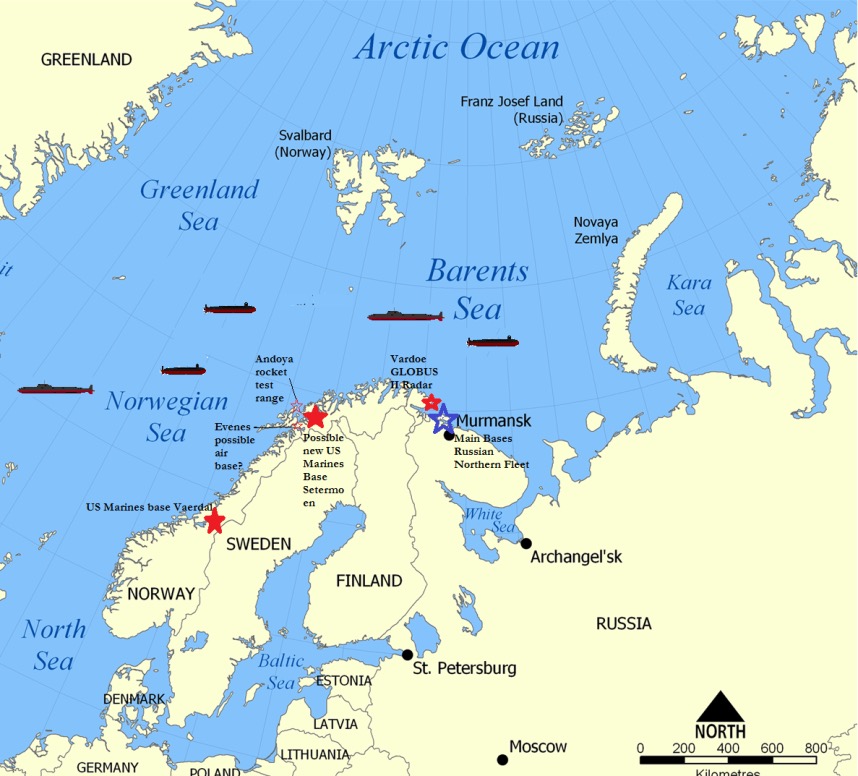 Just a few years ago the purchase of 5 P-8A Poseidon maritime patrol planes was dismissed as to expensive. It would take away money from other areas. It is an advanced plane, and not many countries in the world, especially small ones, see the need for it. Purchasers so far are fairly large military forces like Australia, UK and India.

A steady stream of lobbying from one top US official after another seems to have opened  the wallet. Some indirect opposition has come from the defence forces themselves. The chief of the Norwegian army has earlier declared that if the land forces did not receive more funding, one would require allied troops on Norwegian soil. Of course, Norway has a rather large military budget. It is not the level of funding, but the priorities, like this extravagant plane purchase and the F-35, that  forces the hand.

P-8A Poseidon is equipped with torpedoes that can be dropped from  great height. The plane has advanced manoeuvrable rockets, and  is able to work together with the US drone MQ-4C Triton. It is a anti-submarine plane, designed for the task of chasing down Russian  submarines filled with nuclear missiles able to hit US cities.

The purchase of the planes is officially priced at 9.8 billion NOK (1.2 billion USD). The real price is much higher, but would to some degree be offset by US subsidies.

Norway as an important part of nuclear war

The main thing to keep in mind is the immense strategic usefulness of Norway in a war against Russia. On the Kola peninsula, just a few miles from the border, are the home bases of the Russian Northern Fleet, with its many strategic submarines. For geographical reasons – ice-free harbours – this peninsula is where the main Russian fleet units are, and has to be, based. A bit like Crimea, only much more sensitive.

Several invaluable services in this SIGNIT-cooperation are provided the Globus II/III radar complexes, in the town of Vardø. This is nominally a Norwegian project, but funded by the US and supervised by the US Air Force Space Command. Since Globus III will be able to track space objects as small as a baseball, it is – as usual with official denials – a part of the US ABM-system. Other radar and SIGNINT-stations, including on officially demilitarized Svalbard, are of high military interest. But they are not there only to keep an eye on any Russian activity.

Since this area provides the shortest flight path to Moscow, US ballistic missile submarines are  stationed in the Norwegian Sea. To research possible problems with launches, the Andøya  rocket test base was established in 1962, again with heavy US subsidies. (As anyone who has ever been there would know, the island is a really windswept place, and would be an unlikely place  to place a rocket firing range for any other reasons). One of its missions was to supply telemetric data, since the trajectory and atmospheric conditions for these scientific rockets are virtually identical to the Trident ballistic missiles that would be fired from these submarines. One could also use these test rockets to gauge how the USSR missile warning system would respond.

Over the years, the northern parts of Norway  has been home to many SIGNINT projects. As often as not, the information gathered was not shared with Norway.

All (sensor)eyes on the main target: The Russian nuclear submarine bases on the Kola peninsula

Apart from SIGNINT, Norway has recently found itself in the position of having a more aggressive military posture. Three new F-35 Lighting from Lockheed-Martin are scheduled to be in service by November, the first of 52 of these planes. Barely usable for traditional interception, these planes are designed to carry missiles and precision bombs to target deep inside enemy territory.

Similar upgrades of sea based missiles systems have the same capabilities, to knock out enemy bases from a long distance. As part of an area based missile defence system, in case of a first strike on Russian nuclear assets, these ships might be able to eliminate any remaining Russian missile launchers that manage to survive.

This is tacitly admitted (presented as a response to a Russian invasion) in the Norwegian military’s own strategy documents (leaked draft version 3.1.2.4), where they acknowledge that for the Russians, the northernmost part of Norway “would appear to be an open corridor for attacks with planes and cruise missiles”, the very systems that are being purchased.

The US have put lots of effort into researching how to knock out these bases. They are buried deep underground, in a geologically very hard type of rock. In the 1990’s, after the end of the cold war, the US Nuclear Defence Agency, responsible for researching new nuclear weapons, did several test explosions in an abandoned  mine shaft just a few kilometres from  the Russian border. The purpose of the tests was to see what sort of (nuclear) strikes would be required to penetrate this type of rock.

So in case of a conflict, one could find the ridiculous situation that the bulk of Norwegian forces are stationed far away, whilst home territory becomes a playground for the US Marine Corps. These units might have their own objectives apart from territorial defence.

At the same time, the deep integration into US nuclear war systems will make Norwegian participation inevitable; antisubmarine-planes chasing Russian nuclear strategic submarines; radars being vital to any nuclear strike or ABM-systems; F35 and advanced missiles that only are good for hitting Russian bases. In a tense situation where both Russia and the US are upgrading their Arctic capabilities, one can question the wisdom of insisting on being such an eager part of the encirclement of Russia, in what is obviously a drive for war.

Terje Maloy is a Norwegian/Australian blogger and translator. This article is Creative Commons for non-commercial purposes.

The original source of this article is Global Research