In yet another example of Silicon Valley Sharia, and further evidence that the big tech social media companies are in bed with the radical Left, Apple and Google are the top campaign contributors to. Rep. Ilhan Omar’s 2020 congressional re-election campaign. 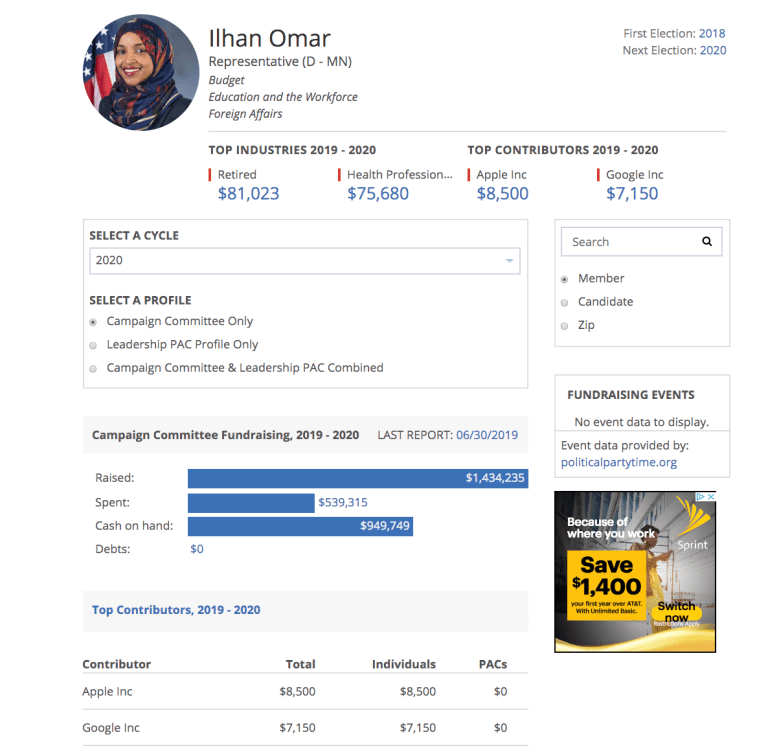 According to FEC reports, Omar has received $8,500 in donations from Apple employees, and $7150 from Google employees, her two top donors.

As of date, Omar has raised a little over $1.4 million for her re-election campaign, and has already spent $539,315 of it, a large portion of which has reportedly been given to Tim Mynett, a Democratic political consultant whose wife accused him of having an affair with Omar.

According to the divorce filing, Tim Mynett met Omar while working on her campaign for Congress. Federal Election Commission filings show that Omar’s campaign has paid “E Street Group” over $220,000 for campaign related expenses.

AN FEC report has been filed that accuses Rep. Ilhan Omar illegally used her campaign funds to pay for travel expenses for her married boyfriend, Tim Mynett.

Luckily, for Omar, who is arguably the most scandal plagued first term Congresswoman in US history, the big tech social media companies, including Google, Apple, Facebook, and Twitter, all control the search engine algorithms. These companies have been caught on hidden audio and camera admitting to manipulating search engine results to favor Democrat candidates and censor Republicans. For this reason, when you Google search “Ilhan Omar”, none of the negative stories about her show up on the first page of search results.

However, when you type the word “idiot” into Google, the first image that pops up is a picture of President Donald Trump.

In November, conservative investigative journalist Laura Loomer was permanently banned from Twitter when she tweeted “Ilhan Omar is anti-Jewish”. 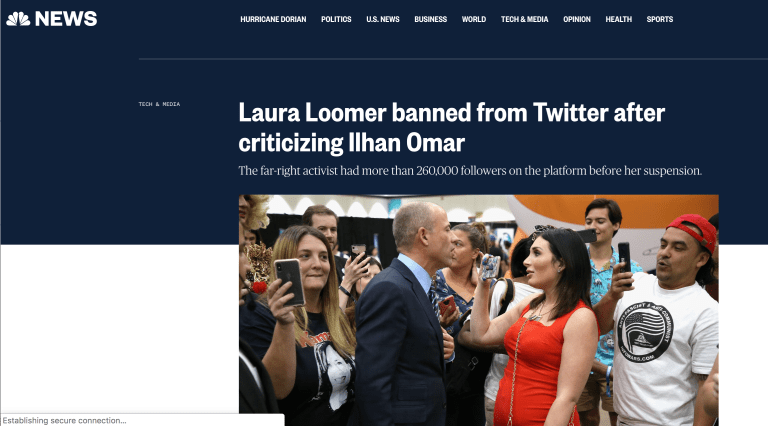 In January 2019, the Wall Street Journal released a damning report which revealed that the Council on American Islamic Relations (CAIR), which has endorsed Omar and invested money into her campaign, privately lobbied Twitter executives to ban Loomer for her exposes on Omar.

There is plenty of evidence which suggests Big tech is engaged in financial and political arrangements with the Democrat Party and left-leaning activists who work together to boost Democrat candidates and suppress Republicans, as reported by the Wall Street Journal.

Phil is back on stage, taking us through camera features.

A TIME magazine cover was shot on an iPhone https://t.co/bsraCoBLLW #AppleEvent pic.twitter.com/1al26Bkxoz

In 2018, before Omar was elected to office, Apple used a Time Magazine photo of Ilhan Omar to promote a the new iPhone.

Omar appeared during a section of Apple’s presentation led by Apple’s senior VP of worldwide marketing Phil Schiller, who was praising the quality of the iPhone’s camera. Schiller said that the TimeMagazine cover featuring Rep. Omar was actually shot using an iPhone.

The use of Omar’s picture in an Apple presentation wasn’t random. The act of using an image to promote a product or vice versa is called “product placement”, and companies, especially multi-billion dollar tech companies like Google and Apple spend millions of dollars on product placement and advertising, especially when it involves product launches.

It is highly probable that Time Magazine, Ilhan Omar, and Apple had some type of pre-arranged business deal prior to the Apple product launch, and this deal is now spilling over into Omar’s campaign contributions ahead of the 2020 campaign as demonstrated by the fact that Apple is Omar’s number one campaign donor.

Why would a woman who was then still a candidate for Congress, and not an elected member of Congress, be featured on the cover of Time Magazine, and why would Apple be using a woman plagued with a marriage fraud and anti-Semitism scandal at this very time in 2018, as the center piece for their promotion of the iPhone?

Another concern that arises from the fact that Omar’s top two campaign donors are Apple and Google employees is the legality and legitimacy of the donations, given than the big tech social media companies tend to employ more foreigners who are on HB1 visas than actual US Citizens.

How many of the campaign donations that Omar received from Apple and Google employees are from non-US citizen employees of the tech giants?

The fact that Ilhan Omar’s top donors are employees from two of the biggest tech companies in the world suggests that donations for Democrat candidates are actively being solicited within the workplaces of companies that provide more jobs for non-US citizens than US citizens at Apple and Google, a further indication that these companies are biased against Republicans.

According to a report from Tech Crunch,

H-1B visas allow foreign workers — specifically those in technical roles—to legally work in the United States. In lobbying for an expansion of the current H-1B visa program, Google executive Eric Schmidt said, “We take very, very smart people, bring them into the country, give them a diploma and kick them out where they go on to create companies that compete with us.”

Amid this discussion, jobs at Google,  Facebook and other tech giants have grown increasingly lucrative for Americans and foreigners alike.

An analysis of records from the Office of Foreign Labor Certification (OFLC) reveals that the median salary offered to H-1B applicants by some of the biggest tech companies — Amazon, Apple, Facebook, Google and Microsoft — is well over $100K and continues to rise.”

How are Americans supposed to have any faith in their political system when the technology they use on a daily basis is controlled by monopolistic tyrannical tech companies that are using algorithms and foreign workers to favor far-Left, anti-American politicians like Ilhan Omar, who has ties to terrorist organizations?

The Democrats have complained for three years about so called “Russian interference” in the 2016 US Presidential election, an absolute hoax, while they simultaneously ignore all of the collusion that big tech and foreign actors contracted with big tech are actually playing in the US election, and the effect they are having on Constitutionally protected speech as outlined in the First Amendment.

During a June interview on Fox Business, President Donald Trump said,
“Let me tell you, they’re trying to rig the election. That’s what we should be looking at.”

Trump was referring to a Project Veritas report exposing Google executive Jen Gennai who was caught on camera discussing how Google could manipulate their algorithm to prevent a Trump victory.

“I tell you what, they should be sued, because what’s happening with the bias, and you see it with that executive from Google, the hatred for the Republicans,” he said. “It’s not even like, ‘Gee let’s lean Democrat,’ the hatred.” “You may need legislation to create competition. We should be suing Google and Facebook, perhaps we will. “These people are all Democrats, it’s totally biased toward Democrats,” Trump said.

President Trump is correct. Google, Apple, Facebook, and Twitter are inherently biased against Conservatives and they should be sued for election interference.

It should alarm every single American that the people who control what you see and hear are collectively donating to Ilhan Omar and other far-left candidates.

Here is a list of some of Omar’s activities as an elected official. This is what Google and Apple are supporting and putting their money behind:

If I listed all of the scandals Omar has been involved in, and is actively engaged in, I would be sitting here typing for days…maybe even months.

Yet you may not have been aware of any or all of these scandals because Omar is protected by big tech.

It’s time for the Trump administration to act against big tech before they steal the 2020 presidential election…because we all know they will if given the opportunity.

This article originally published by Laura Loomer at lauraloomer.us

Laura Loomer is a conservative investigative journalist and activist. Originally from Arizona, Laura began her career working as an undercover journalist for Project Veritas from 2015-2017. She covers politics, anti-Semitism, immigration, terrorism, the Islamification of the West, and voter fraud. Loomer’s investigations have been broadcasted on every major national mainstream media outlet in the United States, as well as many international publications.