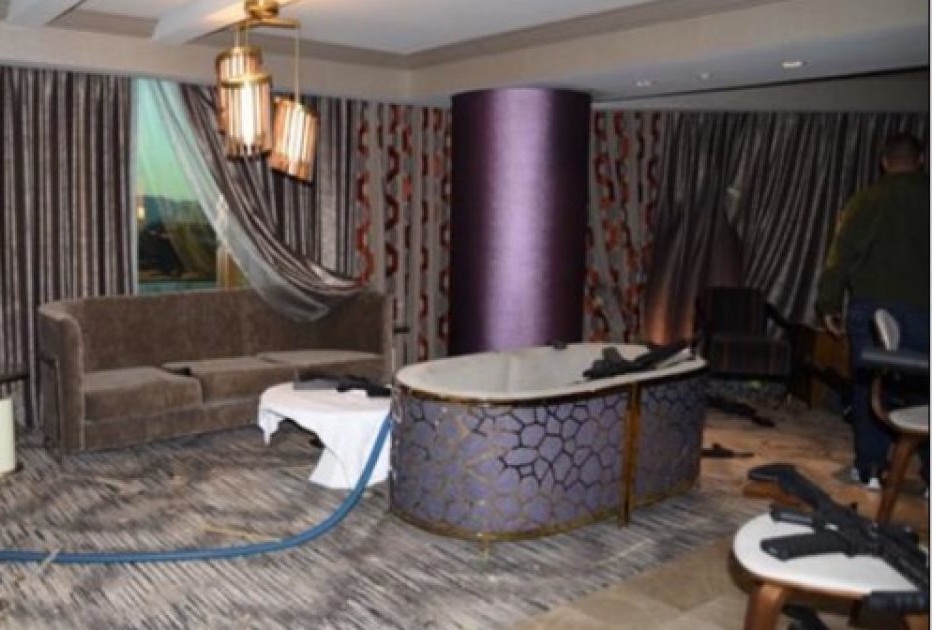 OK, so there have been several reports about the Las Vegas shooting that occurred on October 1, 2017, over one year ago.  Earlier this year, it was revealed that a noise complaint from alleged shooter Stephen Paddock’s room was issued to the Mandalay Bay Casino and Hotel for the room below him.  The issue is that Paddock, according to intelligence services, was not even in his room, but rather was at his home in Mesquite, Nevada.  So, who made the complaint?

According to a report from US News from January 2018:

Sept. 30: Paddock places a “do not disturb” sign on both Mandalay Bay rooms, travels twice to Mesquite, and rolls a total of six suitcases into the rooms. He declines housekeeping service and gambles for a couple of hours before driving home to Mesquite.

Oct. 1: Paddock returns to the Mandalay Bay, gambles for several hours, takes two rolling suitcases and a third bag to his room, moves his vehicle from self-park to valet and orders two room service entrees in Danley’s name.

According to an intelligence report obtained by Big League Politics, which was compiled by former high-level United States intelligence officers, Paddock was not in his room at the time, but rather at his home in Mesquite.

So, consider the fact that the noise complaint occurred early on the morning of October 1 while Paddock was allegedly at his home in Mesquite.

According to The Daily Mail:

Albert Garzon, a restaurant owner visiting from San Diego, and his wife and friends, was staying in 31-135, directly beneath Paddock, when he says he got a knock on the door at 1.30am.

It was security asking him to turn down the music after another guest had complained about the noise, the New York Times reports.

When he asked who it was, he replied: ‘It’s the guest above you.’

Garzon says they turned down the music, but half an hour later, they got another visit from a different security guard saying the hotel had received another complaint from the same individual.

The restaurateur agreed and turned the music off.

He gave it very little thought amid the ensuing chaos on Sunday, until early on Monday, when he looked up and saw a curtain flapping out of Paddock’s smashed out windows, and realized that the noise complaint had been made by the gunman.

So, two calls came in of a noise complaint from Paddock’s room about an hour apart, the first one around 1:30am.  Yet, he wasn’t there.

The obvious question is, who made the complaint?

We know that the Las Vegas Metro Police have concluded that Paddock acted alone, which there is enough evidence that we are privy to that we know cannot be true.

For instance, while we were told that his girlfriend Marylou Danley was cleared within hours after she was allegedly in the Philippines thought she had just been at the hotel prior to the shooting.  Could she have actually been in the room?  Perhaps.

Then, we have the mystery of who locked the door to the adjoining room that was also in Paddock’s name.

Then, we have the Islamic State making not one, not two, but three different claims that Paddock was a convert to Islam.

That could be the actual Islamic State or it could be many of their handlers.  We commonly refer to them as the Central Intelligence Agency.

Was it an Islamist?  Was it a federal agent?  Was it Paddock’s girlfriend?

Was it perhaps that Australian that neither the FBI nor the Las Vegas Police decided to interview who claimed to know things only investigators knew about Paddock and his room and claimed he was in the room beside him?

Will we ever be given the truth about the Vegas shooting?