A four year old video from Wi-Fiber Technology does not even come close to telling the whole story of how law enforcement and Fusion Centers can use this product to secretly monitor Americans.

At approximately the 1 minute mark of the above video, Wi-Fiber offers a glimpse into how government agencies use their product to “improve public safety and emergency response in real-time.”

A look at Wi-Fiber’s website reveals next to nothing about how their “Self-Forming, Modular, Autonomous, Real-Time, Turn-Key” (S.M.A.R.T.) product is used. Which opens up a ton of questions.

Readers are left guessing as to how and why law enforcement would want to use S.M.A.R.T. until you start to read between the lines.

You see, S.M.A.R.T. is really just an acronym for smart cities and everything it entails. Wi-Fiber uses Smart Mesh, Edge Computing, Inter-Operability, Visualization, Cloud and G.A.R.I.2.  The G.A.R.I.2 PowerPoint Presentation reveals exactly why police are so excited to purchase Wi-Fiber.

All of these smart city devices are designed to do two things, be accessible by one platform and provide intelligence in real-time. As Canton, Ohio Police Chief  Jack Angelo said, “the more and more we dug into it, we saw that it was going to be probably more of a cost-effective solution.”

A recent Columbus-Dispatch article was a little more revealing.

“Wi-Fiber technology has proven more useful to police than the ShotSpotter system it replaced,  “We get a lot more out of cameras and license plate reading than we do out of the shot detection,“ Chief Angelo said.”

How are police departments getting more intelligence out of Wi-Fiber than license plate readers and ShotSpotter? Because Wi-Fiber allows law enforcement to use CCTV cameras in ways they could only dream about years ago.

“We’ve had alerts on stolen cars from the license plates readers, even able to follow the cars on the cameras, and we’re able to make arrests without pursuits,“ Angelo said.

Chief Angelo also mentioned that they used Wi-Fiber to monitor protesters “at a distance for a less visible police presence.” But would not get into specifics, because as he put it “they’re still going through the justice system.”

Could the reason he refused to divulge more specifics is because they are using Wi-Fiber to illegally monitor innocent people? Or could it be that he does not want the public to know that the Department of Justice is funding public surveillance through

“Project Safe Neighborhood”(PSN) grants? Both are questions that need to be answered.

As the Columbus-Dispatch mentioned, the Canton Police Department received two DOJ grants totaling $47,800, which will fund an expansion of cameras, license plate readers and shot-detection devices.

devices; it is portable and can be moved at a moments notice, making it nearly impossible for the public to know if police are using it to illegally monitor innocent people. 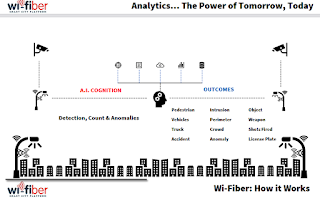 “Information collected by Wi-Fiber equipment is accessible from the department’s Real Time Crime Center, which is staffed by Officer James Dreussi, in the dispatch room.”

The Canton police department plans on giving every police vehicle access to Wi-Fiber, ‘once the licensing and everything is taken care of’.

Wi-Fiber will allow police to monitor the public and vehicles in more intrusive ways. (To find out how law enforcement will use Wi-Fiber click here.)

“The plan to hire a part-time civilian analyst — so the Real Time Crime Center can be monitored 16 hours a day — was put on hold because of COVID-19 financial concerns. Angelo said the department has hired more officers in recent years and might be able to assign an additional officer, if not a civilian analyst.”

Nowhere in PSN’s overview does it mention grant money being used to expand Fusion Center surveillance cameras. But as we know, there is more here than meets the eye.

Wi-Fiber can turn any camera into a real-time AI surveillance device, with historical applications.

Wi-Fiber can identify pedestrians, single out people in crowds, vehicles, bicycles, scooters and even identify objects people are carrying. When one looks at how police use Wi-Fiber, a much more disturbing picture begins to unfold. 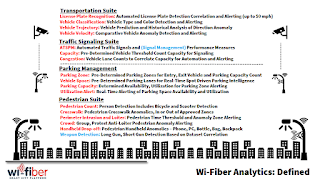 Pedestrian Crosswalk Anomalies, In or Out of Approved Zones Perimeter Intrusion and Loiter:

Police can use Wi-Fiber to target nearly anyone for things like, loitering, walking out of approved zones or carrying a suspicious object. Wi-Fiber will also allow police to set up red-flag zones or “zone detection” areas, that will record and flag people and vehicles entering or exiting a specific area.

Unfortunately, the Canton, Ohio’s police chiefs’ desire to use Wi-Fiber to turn an entire city into a Fusion Center surveillance zone is only the tip of the iceberg.

Part 2: “How The Feds Will Use Wi-Fiber To Create A National Public Surveillance Network” will be released next week.