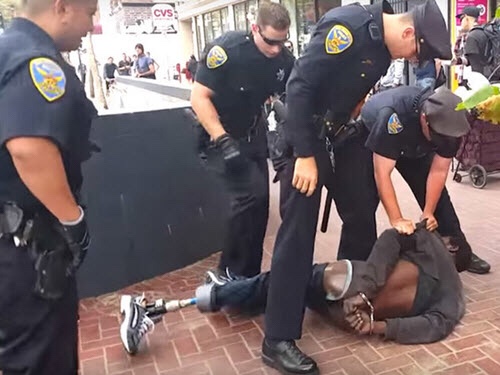 According to a group of 10 former Austin Police Department recruits who wanted to become peace officers, just like the military, the Austin PD is training  “warriors” instead of “guardians.” Although this should hardly come as a surprise because the Supreme Court has already declared that cops don’t have to protect or “guard” you at all.  They are to follow orders, extort (and sometimes flat out steal) money for their department, and enforce laws that are often tyrannical and the very definition of a human rights violation.

The former recruits are now blowing the whistle and claiming that the type of mentality they encountered during training is not what they signed up for and is not representative of the greater Austin community. Cops are being trained to view the public as their enemy and not fellow human beings deserving of rights. KVUE writes:

Summer Spisak, a 38-year-old former tech employee who participated in nine weeks of the eight-month academy last year, said instructors told her and other cadets they would “punch them in the face” if they said they wanted to be police officers to help people.

KVUE continued by describing another former recruit’s observations of the police training currently being implemented at the Austin PD:

Jonathan Murray, who now works in sales for Dell, said instructors repeatedly degraded the homeless and prostitutes, referring to them as “cockroaches” and suggesting they “find a transient” if they were bored and wanted a felony arrest.

According to the former recruits and as reported by The Free Thought Project, officers of the “peace” should have a “guardian” mentality as opposed to the “warrior” mindset the recruits and graduates are being taught to possess. Both Spisak and Murray joined eight others who voiced their concerns in a letter to two different news agencies. Their objections were met, predictably, with denial by Austin’s Chief of Police, Brian Manley, who claims his cadets are trained to be both guardians and warriors.

We train our officers at the Austin Police Department to be guardians, but to have the ability in the moment to become a warrior when it is necessary…Law enforcement is a profession where you have situations where you have to go in and use force to protect yourself or the community, but the vast majority of the work we do requires that guardian mindset—that guardian training.

Part of the motivation, it seems, to train police to be warriors comes from the false perception that there is a war raging against law enforcement. There are absolutely zero statistics to support the claim that there is a “War on Cops” at work on the streets of America. There are, on the other hand, plenty of statistics that show alarmingly that cops are ones warring against the regular citizens, as one can read here in an article called The ‘Thin Blue Line’ Serves No Purpose.

To criticize or present opposition to the institution of state and federally funded law enforcement is often considered tantamount to treason – or, at the very least, it is considered unpatriotic. After all, we have all been told every moment of our lives that a world without police would immediately turn into a frothing, frenzied orgy of mass insanity and that average human beings cannot be trusted to take responsibility for the day-to-day security of their neighborhoods and towns. Official doctrine today demands a designated warrior class, separate from the rest of us, to handle the protection and care of weakling citizens.

Now, it is important to note that there are, in fact, many good people working in the field of law enforcement. This is not under debate and not relevant to the point I am about to make. The problem is not necessarily with all the individuals who make-up law enforcement; the problem is with the existence and mandate of the institution itself. I personally do not “hate” cops per se (though some of them deserve to be hated). But I do hate corrupt government structures, and law enforcement has become the grasping arm of the elitist machine. –The ‘Thin Blue Line’ Serves No Purpose

While there are less than 75 officers who are killed by bad guys with guns each year, more officer deaths are attributed to suicides than homicide and vehicle accidents—combined. Therefore, there is hardly any justification to train police to become warriors, critics would likely contend. Instead, responsible academy training should understandably focus more on preventing suicides and depression than learning the public is the enemy to be referred to as cockroaches.

What the former recruits are disgusted with boils down to the “Us vs. Them” mentality whereby an officer’s loyalty is to the department and his fellow boys in blue, rather than protecting the interests of the public at large.

Amid all of the warrior, righteous war talk, there are a few police officers who are starting to wake up and unplug from the horrific mindset they’ve been programmed into and who are beginning to think for themselves. Officers are starting to realize the civil asset forfeiture schemes, ticket quotas, arrests for “resisting arrest,” and jailing individuals for being poor (because they cannot pay their fines) ultimately work against a free society and do not jive with what they thought they were signing up to become.

Amid all of the warrior, righteous war talk, there are a few police officers who are starting to wake up and unplug from the mindset and who are beginning to think for themselves. Officers are starting to realize the civil asset forfeiture schemes, ticket quotas, arrests for “resisting arrest,” and jailing individuals for being poor (because they cannot pay their fines) ultimately work against a free society and do not jive with what they thought they were signing up to become. –The ‘Thin Blue Line’ Serves No Purpose

Now it seems even police officer recruits, at least in Austin, are quitting the program before being given the prestigious title of “officer” without rightfully earning it, all because they say the system is corrupt, abusive, and coercive.

There seem to be no limits to which police departments will go to let the public know exactly what they are doing: being used an order following tool of a tyrannical police state. And there are still no limits to the mental gymnastics LEO worshippers will go through to defend these oppressive actions.

Contributed by The Daily Sheeple of www.TheDailySheeple.com.