Are you an American who enjoys having the right to free speech? If you choose platforms such as Facebook or Twitter (very much indeed public platforms), you may find that you have no right to free speech. Twitter is now suspending accounts that name the alledged Whistleblower.

That’s right.  Your government charged, with protecting your constitution, has decided that Social Media does not have to agknowledge those rights. Twitter gets away with suspending any account posting anything they disagree with. If you have something to say that they don’t want others to know, you have now violated their terms. 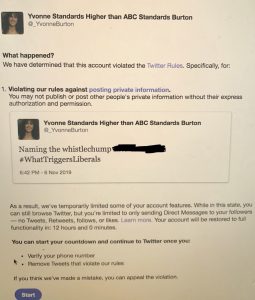 First of all, since when do public officials get to claim their name is private information? Being a public official paid by the people, their job has no right to privacy. Privacy a right priviledged to the people, not their servants. All Americans need to make that clear to themselves.

[Obama Slips, Twitter Puts Him Back In The Closet ]

But that doesn’t stop twitter from making any claim they want to serve the interest of the left. 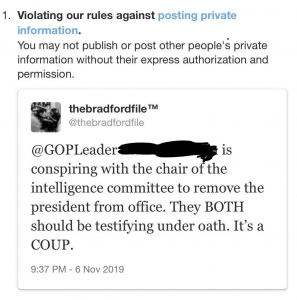 Can it be anymore clear of the ignorant tactics they use? If your job is being paid by the American taxpayer, you have already granted express authorization and permission for your (very much unprivate) name. It really is that damned simple. Who the hell are you to have access to anyones private information but get to claim privacy for yourself? If you want to enjoy the rights granted to private citizens then you have no business being a government employee.

Moreover, The name has been mentioned publicly several times.

The Whistleblower has been named in the Mueller Report and also on Page 236 of the Bill Taylor testimony:

Named also in the media:

More than two months after the official filed his complaint, pretty much all that’s known publicly about him is that he is a CIA analyst who at one point was detailed to the White House and is now back working at the CIA.

But the name of a government official fitting that description — Eric Ciaramella — has been raised privately in impeachment depositions, according to officials with direct knowledge of the proceedings, as well as in at least one open hearing held by a House committee not involved in the impeachment inquiry. Fearing their anonymous witness could be exposed, Democrats this week blocked Republicans from asking more questions about him and intend to redact his name from all deposition transcripts.

Twitter obviously thinks they can do as they please with no accountability.

Author and editor for America Uncensored.net. L Steele has written for online publications since 1999 on a variety of subjects. He has held several positions where he gained knowledge and contacts on subject matter of which he writes. He values honesty and integrity. Views are his alone and do not necessarily reflect the views of anyone else. His articles may be republished in digital form for noncommercial / non-paywall use, provided full author credit and a direct link to the page. You can follow L Steele on LinkedIn, on Twitter, on Minds, and on Facebook. Support for his work through Cash-App is appreciated and helps keep his work and this site active.