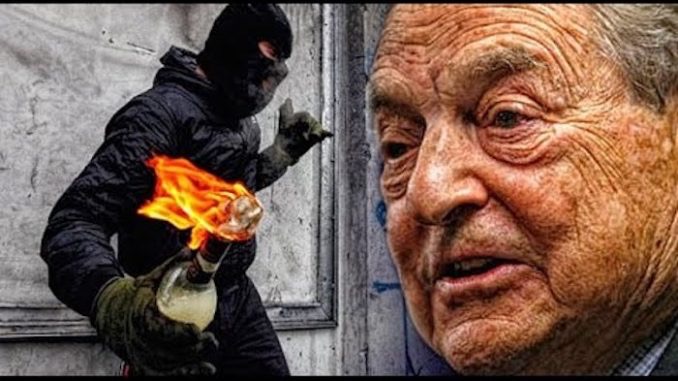 Soros is known for using his wealth to destabilize nations. Directing his evil through Open Society toward the United States in recent years. As reported at Fox news.

It’s unclear what Soros’ group will use the billions of dollars toward. He recently posted on his Twitter page articles about the Open Society Foundations’ work in countries including Albania and Macedonia.

But the Hungarian-born heavyweight has spent years investing money to support fiercely liberal, partisan causes in the U.S. and throughout the world.

Soros, 87, has used his stash of money to place his stamp and influence on more than 100 organizations in more than 100 countries, spanning five continents. He’s pumped money into Planned Parenthood and the Black Lives Matter movement and contributed $1.4 million to help pass a California law that would make drug possession and minor theft charges misdemeanors.

Soros has been a heavy funder of Antifa through Open Society, along with Kellogg and Ford Foundations. Antifa has been known to cause chaos and violence and has made clear their plans for total disruption.

Antifa, which has not been ruled out as being behind the Las Vegas massacre, has made public their plans for “civil war” to begin on November 4th.

With the gift of $18 billion and his army of thugs, it becomes clear that Soros is trying to unleash a nightmare. Something big and disastrous is likely on the way.

Author and editor for America Uncensored.net. L Steele has been writing online since 1999 on a variety of subjects. He has held several positions where he gained knowledge and contacts on subjects such as security, surveillance, and tech. He values honesty and integrity. Views are his alone and do not necesarrily reflect the views of anyone else. His articles may be republished in digital form for noncommercial / non-paywall use, provided full author credit and a direct link to the page. You can follow L Steele on Twitter on Minds and on Facebook. Support for his work at Pay-Pal is appreciated and helps keep this site active.