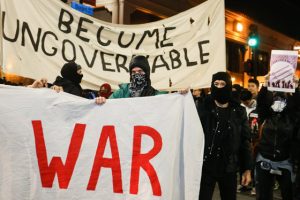 A group of hard-left agitators affiliated with the Black Lives Matter movement disrupted a free speech event put on by the American Civil Liberties Union at the College of William & Mary, rushing the stage and preventing the guest from even speaking while chanting Antifa like slogans about how bad the country is and the need to shut down free speech once and for all.

The ACLU’s Claire Gastañaga was at the college to speak on the subject of “Students and the First Amendment” but shortly after taking the stage she was overrun with BLM protesters who made it clear they were there to do one thing – shut down free speech completely.

As Reason Magazine reported, the disruption was livestreamed and documented a variety of different shocking statements made by the group that paint a clear picture of who the people on the hard-left really are as well as what they seem to be willing to do to achieve their goals.

The agitators began to chant “ACLU, you protect Hitler too,” in apparent reference to the ACLU’s continued stance on protecting all Americans right to free speech, including idiot white supremacists.

“Shame, shame, shame,” they continued before then making a series of chants that should shock any decent American who supports our system of government.

In what could easily be interpreted as meaning that the protesters were willing to break other Americans Constitutional rights as long as it achieved their own goals, the group shouted, “the revolution will not uphold the Constitution.”

This went on for nearly 20 minutes. Eventually, according to the campus’s Flat Hat News, one of the college’s co-organizers of the event handed a microphone to the protest’s leader, who delivered a prepared statement. The disruption was apparently payback for the ACLU’s principled First Amendment defense of the Charlottesville alt-right’s civil liberties.

Organizers then canceled the event; some members of the audience approached the podium in an attempt to speak with Gastañaga, but the protesters would not permit it. They surrounded Gastañaga, raised their voices even louder, and drove everybody else away.

After news of the disruption began to gain traction on social media, the college issued a statement that amazingly stood up for free speech but in a very “tepid” manner.

William & Mary has a powerful commitment to the free play of ideas. We have a campus where respectful dialogue, especially in disagreement, is encouraged so that we can listen and learn from views that differ from our own, so that we can freely express our own views, and so that debate can occur. Unfortunately, that type of exchange was unable to take place Wednesday night when an event to discuss a very important matter – the meaning of the First Amendment — could not be held as planned. …

Silencing certain voices in order to advance the cause of others is not acceptable in our community. This stifles debate and prevents those who’ve come to hear a speaker, our students in particular, from asking questions, often hard questions, and from engaging in debate where the strength of ideas, not the power of shouting, is the currency. William & Mary must be a campus that welcomes difficult conversations, honest debate and civil dialogue.

That’s right, Black Lives Matter, which is supported by Antifa groups across the country (as well as the mainstream media for that matter), has openly admitted that they are fighting AGAINST free speech and other Constitutionally protected rights, even if it means targeting groups they would normally ally with.

Amazingly, the agitators even claimed that liberalism itself is white supremacy which seems to indicate that these hard-left groups that have popped up across the country are truly against any American who supports the current capitalist system, regardless of political stance.