A top American lawyer, Alan Dershowitz has shown just what he thinks of the tax cattle, saying the government has the power to “plunge a needle in your arm.” According to Comrade Dershowitz, you have “no right not to be vaccinated.”

Dershowitz, who infamously defended President Donald Trump during his Senate impeachment trial says you have no right to decide what goes into your body. That is for the government to decide. Americans need to wake up, or before we know it, everyone save a few will have “the mark of the beast” in no time.

In the “land of the free,” you have no rights that the government doesn’t give you, according to Dershowitz. He later says that “this is what democracy is all about.” Meaning that if a majority of the population wants to take your rights and freedom, you have to submit to your slavery.  Democracy has become nothing more than a cruel joke played on people for thousands of years giving them the illusion of choice. When is enough, enough?

EDITOR’S NOTE: Yes, I know the U.S. is “supposed” to be a “Constitutional Republic,” but anyone with two brain cells to rub together knows it hasn’t been for a long time and never will be again. 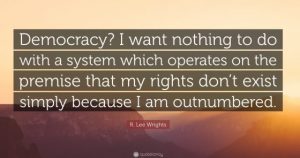 If you refuse to comply with mandatory vaccinations, Dershowitz says you will be forced to comply.  “And if you refuse to be vaccinated, the state has the power to literally take you to a doctor’s office and plunge a needle into your arm.”

The lawyer said that U.S. residents don’t have a right to infect others and that if they wish to opt-out of vaccination, they could be given an alternative in which people rejecting the state mandate could remain in their homes permanently so as not to risk infecting others. “That’s what a democracy is about,” he said. “If the majority of the people agree and support that, for public health measures, you have to be vaccinated, you have to be vaccinated. They should give you an alternative. The alternative is to live in your home, don’t get vaccinated, but never ever leave your home or live in a bubble. But if you want to interact with other people, you cannot become Typhoid Mary. The Constitution doesn’t give you the right to spread your illness to other people.”

The Constitution also doesn’t give the government the right to enslave the public, but that’s exactly what’s happened in a matter of months.  The government is not coming to “save” us.  We are the ones we have been waiting for and the only way this stops is by waking people up to their slavery.